TIP OF THE SPEAR

The Hindmost has ordered that a U.S. Navy Warship sail within the claimed territorial seas of one of China's new islands in the South China Sea. His will be done. Obama.

Those interested can watch an interesting video on how to claim millions of square miles of sea bed as part of your very own Exclusive Economic Zone where you too can delve for minerals, oil and natural gas without pesky interlopers.

The navy calls these FONs. It stands for Freedom of Navigation and it is the means we use to abide by the international law of the sea that we recognize. Basically, if one doesn't exert one's rights, one loses them. We played this game for decades with the Soviet Union and other grasping communist, muslim and socialist tyrannies. Usually they met with success. Sometimes they ran into trouble. Trouble is a matter of life and death, not a matter of getting a dent or the paint scraped off some piece of hull as you can see from the shameful Hainan Island Incident in 2001.

The last FON that was not a FON but close enough for government work, involved the loss of a US Navy spy plane with all the latest and greatest spy gear, communications and equipment when it was damaged by a Chinese Air Force plane and decided it had no choice but to turn over all of America's embarked, hard won, top secret technology to the Chinese rather than crash land in the deep ocean and let it all sink to the bottom. 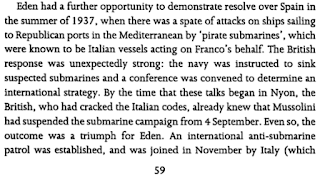 There's another problem with running USN warships around reefs in the South China Sea. The Navy's charts aren't very accurate or reliable.