A pack of lunatic, almost, but not quite, scientists, signed a letter and submitted it to the Attorney General of the United States demanding that climate deniers be purged, prosecuted as criminals and thrown in jail for the crime of debating the actual science of global warming. I didn't want them to pass unnoticed. 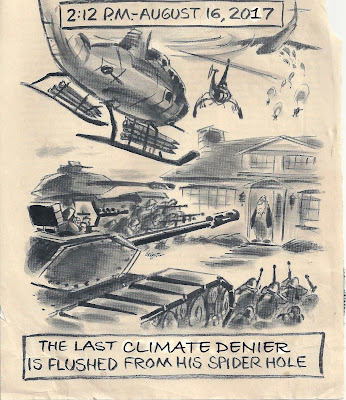 The list below contains the names and affiliations of pseudo-scientists who wrote to President Obama urging him to use the RICO statute to prosecute people who disagree with them on climate science and telling him to use all necessary law and force to end the debate on climate science and put scientific disagreement with the global warming scam in the same status as organized crime.  If they can't win the scientific debate with persuasion, they will win it by sending the deniers to jail.  From the letter:


One additional tool – recently proposed by Senator Sheldon Whitehouse – is a RICO (Racketeer Influenced and Corrupt Organizations Act) investigation of corporations and other organizations that have knowingly deceived the American people about the risks of climate change, as a means to forestall America’s response to climate change. The letter was signed by the following "climate priests/scientists":

I returned to the source to check my facts and this is what now appears in place of their despicable letter:


The letter that was inadvertently posted on this web site has been removed. It was decided more than two years ago that the Institute of Global Environment and Society (IGES) would be dissolved when the projects then undertaken by IGES would be completed. All research projects by IGES were completed in July 2015, and the IGES web site is in the process of being decommissioned.

It appears that the IGES people have suddenly been made aware of just where they stand under the law and how it deals with corrupt practices. For more on that see the fascinating reading at Watts Up With That.


It would appear that there’s about $31.5 million in overhead (1/2 of 63 million) that should have gone to GMU, but the grants were run through the consulting company, in clear violation of the rules for state employees. This is money that the taxpayers of Virginia had to pony up instead.

IGES’ Form 990 shows Shukla worked 28 hours per week for it. That can only happen if the Dean approves an overage beyond the eight hours allowed.

GMU’s faculty Dean had to know about the magnitude of the money flowing through IGES and into the Shukla family.

GMU’s Provost had to know this, because no Dean would permit that all that overhead to not go to the university on his or her own.

NSF had to know this.

NOAA had to know this.

NASA had to know this.

Apparently each one of these entities felt they were above the law. You may be looking at the largest science scandal in US history.

I don't know about the largest science scandal in history. I always thought that honor fell to the National Ignition Facility (NIF). What the people who signed that letter did was a scandal and a discredit to science and their affiliated universities. Siccing the prosecutor of the United States on people who do nothing more than disagree with Al Gore's science, research methods or practices, is inexcusable.
Posted by HMS Defiant at 12:10 AM