A LOVELY LITTLE STRIKE FROM THE CASPIAN SEA

This is pretty cool. A strike from the Caspian Sea on some junior varsity terrorists but with a unique twist. For once it's not one of our strikes but a Russian strike from the sea. It's been a long time since they did anything like that. 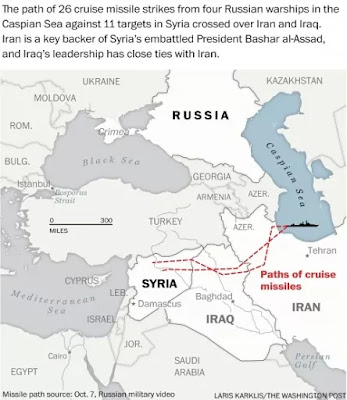 Try to imagine the insanity rampant in a newsroom that publishes garbage like this:

While the Kremlin’s stated aim in the conflict is to fight the Islamic State in Syria, the United States and its allies say Russia is concentrating its firepower against other rebel groups to prevent Assad from being overrun. One video on Wednesday appeared to show the Free Syrian Army, a moderate force backed by the West, firing anti­tank missiles at government troops advancing with Russian air support.

One would think that by this point even a journalist has to accept the fact that there is no such thing as a well armed moderate muslim shooting anti-tank and anti-personnel missiles at government troops even if those troops don't have Soviet airpower in support. They are all complete and total fanatics. I think we can agree that some of them are fighting for their country and their family but they are also supporting one of the most brutal dictatorships of the faithful left on the planet.

There's another point to make with this cruise missile attack.

Even though it is a Soviet lake, look at the warships afloat on this landlocked sea. They are capable of firing land attack missiles at targets up to a thousand miles away in any direction. Contrast with the USN's rather pathetic littoral combat ship which can't project any weapon more than about 8 miles from the ship and even that is straining it beyond it's limits.

On the gripping hand, this looks like the kind of thing that the American military was guilty of all too often. It almost looks like the Russian navy felt that it had to contribute something to the fight against islamic terrorism or be viewed as a waste of resources and so it fought for the right to fire off a full salvo of missiles from the lake in the backyard and hint at what it's ocean going naval units might be capable of.

All in all, a very nice bit of work. I enjoy how the media call this some sort of escalation as if Obama hadn't ordered the navy to fire a hundred land attack missiles into Libya to get Qadaffi.
Posted by HMS Defiant at 5:30 AM