GETTING AWAY WITH MURDER

This is taken from Popehat.

As long as you ignore the fact that the shooting victims were innocent bystanders, hitting two people with three shots represents unusual excellence in marksmanship for the NYPD, matching another recent incident in which skilled NYPD officers were able to hit their target and nine bystanders with only 16 bullets. Overall the NYPD usually requires about 331 rounds to hit 54 targets, of which 14 will be innocent bystanders, 24 will be dogs, and 16 will be people the NYPD was actually aiming at. Statistically, if you aren't a dog, it is slightly more dangerous to be the person the NYPD was shooting at than a bystander (16 people out of 331 shots for intended targets for a 4.8% hit rate vs. 14 people out of 331 shots for bystanders, a 4.2% hit rate.) NYPD has a better success rate for other weapons, and certain factors, like shooting unarmed people in the back, tend to increase hit rates.

When NYPD officers fire 331 shots, and hit 16 targeted people, 24 dogs, but also 14 bystanders, there is a problem.

The interweb has a number of this sort of comment from people reacting to the release of the NYPD good shooting report. According to them, they're all good. What drives some people to drink is that in New York City you can be indicted and prosecuted for assault if the NYPD decides to open fire on you and the police miss you end up shooting two innocent bystanders. It has not been reported if either of the two women were armed. 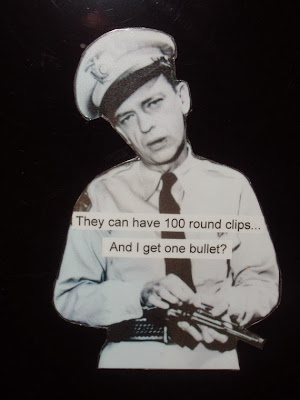 Every week I am more inclined to believe that Barney Fife was not a parody of a police officer, he is a police officer.
Posted by HMS Defiant at 8:00 AM
Labels: America, mock justice, social war