A muslim man was arrested today by some yahoos for driving a van loaded with what he thought was explosives into the airport in Wichita, Kansas. Oddly enough, not one single one of the alleged news outlets in the United States could actually bring itself to write down that he was a muslim. Not one of the eight different stories I checked could bring themselves to write the word muslim. Two of them mentioned something about him being, "radicalized by islamic teachings."

We were cautioned by the legal yahoo in charge to be, "cautious."

The so far unmentioned part of the story of the FBI's involvement in this and so many other cases where muslims buy explosives for their awful attempts at mass murder is that unlike the ATF or USN security forces, the FBI doesn't let the terrorists actually get their hands on working weapons or explosives. Oh sure, the occasional M16 machine gun and the odd sniper rifle vanish whenever the FBI turns their back on them when they leave them on the trunk and go into the donut shop but at least the FBI isn't actively selling real explosives to terrorists...any more. I wonder if they have a checklist they use when they set up their stings:
Wichita? Srsly? 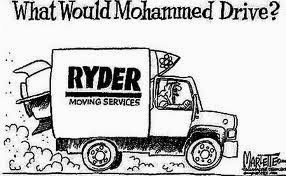