The Fukushima Dai Ichi nuclear meltdown was no accident. It was the cover and deception contingency plan developed to disguise an accidental release of radioactivity from Japan's Top Secret nuclear research and warhead production facility.

Regrettably, the immediate nature of the radiation leaking from the weapon manufacturing site necessitated premature use of Japan's scalar resonance weapon which was used to create the earthquake and tidal wave that "led" to the meltdown at Fukushima.

Japanese workers who bravely worked in the plants in a futile attempt to prevent the meltdown were unaware of the plan and the need for the reactor cores to melt down and contaminate a critical area of Japan and stretches of the Pacific Ocean. 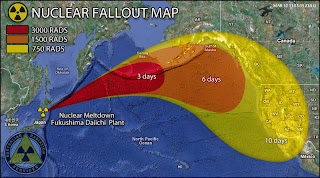 Scientists are only now rationalizing earlier discoveries that showed a sizable increase in the number of neutrons floating in the Pacific. They have been linked by top scientists at the Climate Research Institute in Wallingford, NH, to Neutron Bombs!

I'll be around, just not around here much. We are taking a trip.