I didn't post anything about Captain William Swenson when he was awarded the Medal of Honor because I wanted to give it some time before swirling back to the part that should bring shame and embarrassment to the United States Army. There have been comparisons before now of how long it took for the US to recover from its wounds at Pearl Harbor and then move out and destroy the Empire of Japan in just under 4 years and how long it took the current administration to field a lame web site that cannot begin to deliver on any of the promises made for it by the President and Democrats in Congress. It was not a flattering comparison since it showed that the US defeated the Japanese in less time than the administration had to turn out a web site on a par with Amazon or at least the US Postal Service.

Compare the above with the 4 years, 1 month and 1 week it took the United States Army to award the Medal of Honor to Captain Swenson who had left the Army 3 years ago. The entire massed machinery and bureaucracy of the Army could not read and move a piece of paper written in Afghanistan to the President's desk for signature in under 4 years and it claims to be proud of its heroes. Imagine what it does for its dirtbags. It took the Marines half that time to award the Medal of Honor to one of their own who was in the same engagement with Captain Swenson.

Award packages don't get better with age. They don't accumulate much more in the way of accuracy as time goes by. In fact, once the statements have been taken in an expeditious manner it becomes progressively harder to go back and re-examine the facts because the people involved move on, leave the service, die.

It is not that the Army is too bedeviled by petty bureaucracy to handle this sort of thing. Every single flag staff has at least one individual who is responsible for the awards. In major staffs it is the job of a number of people and it's not like they're buried under Award Nomination packages. There's probably not more than 20 Medal of Honor Award packages in the works at any given time in both Iraq and Afghanistan combined. What those clowns did with Captain Swenson is a disgrace and those involved should apologize.

They also might be forthcoming now with how many award recommendations they have in process right now for the Medal of Honor for other heroes who may never receive them.  Personally? I think I'd decline to serve in any organization that has a Human Resources Command. You know what a name like that implies... 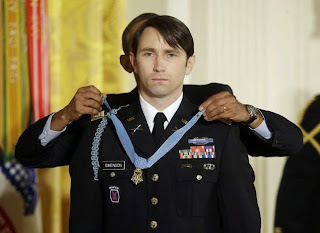 Posted by HMS Defiant at 8:00 AM
Labels: Army, Justice, war