I listened to NPR today and read the news and it looks like the media is once again in full cover and deception mode for the administration and allowing the President and all of his non-media spokesmen to lie their heads off about Healthcare.gov and how all the problems are fixed and its all better now and everything is good to go. They're lying.

It's amazing to me how they rely so deeply on the ignorant voters who pull the lever for stupidity every single time. The vile and odious thing is how the media is slavishly lapping it up and passing it along to the stupid when anybody with 2 brain cells can see what is going to happen next month. Millions of people lost their insurance because Obamacare made their insurance policies unlawful. The policies were canceled effective 31 December in accordance with the Democratic Party's Law.

In January, the people with no insurance who enrolled on Healthcare.gov for replacement insurance are going to find that the "backend" of the program never worked and that they DON'T have any insurance after all. The code failed to communicate the policies to the insurers. The government and media aren't just lying about how 4 diplomats were murdered in Libya in the dark. They're lying about millions and millions of people losing health insurance. As it becomes clear that the people who enrolled at the government's web site don't actually have policies it will come out.

I know why Obama is doing it. He's going to blame the insurance companies. I'm sure he's already got the speech written where he condemns the evil bastards for letting Americans twist in the wind without insurance because they are greedy. 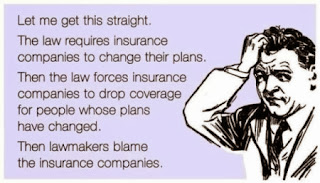