Did I tell the story of the two anchors shown in the masthead picture? John Orth and I were like light in the dark the first time we came aboard that ship in '88. The ship was not at all well.

We returned to Sitrah after a day underway conducting turnover preps, and anchored near a dozen other ships off the coast of Bahrain. We were challenged by the morning. We could not get underway because our anchor windlass motor spun like a top but the wildcat didn't move. Some mornings are like that.

Our anchor windlass was of the controlled torque slip coupling design. The windlass would go around and around but it had slipped forever the surly bonds of controlled torque. We were nailed to the bottom 500 yards off the ASRY drydock.

I could have fixed the problem with an hour of hard drilling, but the skipper said, "no." He had the faith. He was a believer in logistics. I don't need to belabor the point. He was an optimist. We transmitted a highest priority Casualty message to the fleet and the greater fleet that existed to serve us. If cordless drills existed back then, I would have wandered by the Captain's Cabin with a whirring sound every hour or two for the next 4 days.

The first response to our CASREP message is one I remember. My rest was disturbed by an irate XO who waved a signal demand from COMIDEASTFOR that suggested we cease and desist caterwauling about our failure to bring the anchor into the light of the new day and downgrade the request to, "sorry to bother you SPCC Mechanicsburg, if you've got the time, we need a vital 50 year old windlass part."

Our good friends, the parts warehouse at SPCC Mechanicsburg, were heard from a few hours later. They confessed as how they got nothing. It wasn't really a surprise. I started warming up the drill with an idea that would make the controlled torque slip coupling a sort of, a no slip coupling. Then we got a message from the MINE BATTLE FORCE, ordering us to downgrade our casualty.

That made my day. I spent 2 minutes drafting a message in response to the Mine Battle Force which mostly consisted of inviting them to help me raise 10,000 pounds of anchor plus chain so I could shove it up their ass. The skipper didn't want to send that one. On the other hand, I spent the next 4 days, while my friends at BASREC were making a new coupling, informing Bahrain Port Control that this ship couldn't move and so traffic would have to deal with us blocking the path. 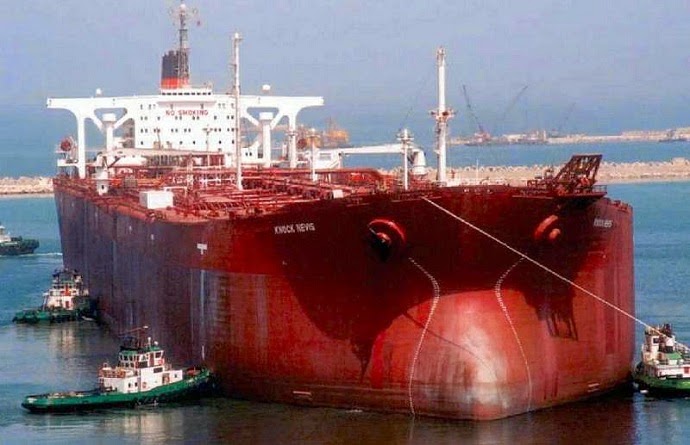 seriously, 50 feet away. You look up and up and up,

The year before, I had spent looking down on fighter bombers on their way to bomb Iran or Iraq. I thought that was weird; from a bridge that wasn't 25 feet above the sea.

Bahrain Port Control really wanted us out of the way.
Posted by HMS Defiant at 1:22 PM
Labels: Sea Stories