It's no surprise to me that democratic policies can bankrupt paradise. In Puerto Rico's case the democratic machine took a hundred years and constant infusions of American dollars to do what Castro did in just 10 years. Eventually though, other people's money dries up and the people are left holding the bag. When they refuse to pay anymore, nobody pays and the little people who invested in mutual funds, bonds, and stocks are wiped out when the misgovernment of the day opts to avoid paying and simply defaults on all the money it borrowed from its creditors.

Read the article and look at the numbers. Those numbers are the underlying facts staring us in the face as politicians and the people who elect them continue to believe passionately in spending money they don't have and never will. Sometimes that ends in anarchy but mostly it ends in the worst form of tyranny this planet has ever seen.

--Democrat Governor Alejandro Garcia Padilla told Bloomberg News last year that Puerto Rico had a constitutional and moral obligation to not default on the island’s $73 billion of debt.  But he just passed a law giving local court proceedings the power to cancel much, or all, of the island’s bond debt.

--Puerto Rico's economy is shrinking at a 6% annual pace.

--"Of their $73 billion of debt, $56 billion is in the form of municipal bonds and a quarter of that is held by unsuspecting investors in their tax-free mutual funds.  On a per capita basis, that debt burden works out to $14,000 per resident; 10 times the average of the 50 states and higher than every state except California and New York."

-- "In addition to debt, Puerto Rico also has a public employee pension plan that is only 11.2% funded.  The current $30 billion in unfunded pension liabilities would add another $6,000 in per capita liability to each Puerto Rican resident."

The original article is pitched in such a way as to lay the blame for Puerto Rico's problems on an inability to speak and read English and claims 90% of the population cannot do either. I don't think that has anything to do with the problem they find themselves faced with today. The problem as I see it, is that we have people trading in bond markets that suffer no penalties at all for lying or failing to do their fiduciary duty to the people and institutions they sell them to. The people that bought and traded all those worthless bonds should be sliced up and used to chum for sharks in Long Island Sound.

The numbers are bad for Puerto Rico. One might almost say that the situation is hopeless. On the other hand, this is what it looks like for the United States in comparison with other leaders in the shameful national debt category: 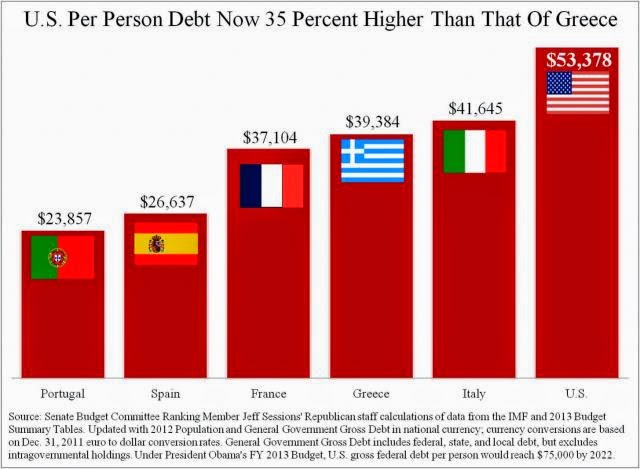 You could read more about it at The Atlantic and oddly, another article in another Atlantic.

Can you imagine the day when everybody repudiates their debts as unpayable? If Europe goes over the edge it will make everybody follow. I think the last time that happened was 1929. This sort of charade is only viable as long as the major powers say that it is. The first to collapse will take down all the rest. That is why, even the utterly insolvent United States Government, raced to send trillions of dollars to prop up the EU banks that were going under as the Euro failed in all the countries to the left of US.
Posted by HMS Defiant at 6:00 AM
Labels: civilization, not viable, Stupidology