Or, how I learned to love the lunatics that brought us the Obama Health Care scam. Let's face it. It could be so much worse then it is and it is about the worst thing that has ever happened to America. Let us contrast it though with a bit of current thinking about a past that is rapidly closing in on us as the Progressives bound into the new century with renewed optimism, no knowledge of history, no clue about international diplomacy, trade, economics, military or naval affairs, business, industry, transportation or information networks/systems and vulnerabilities.

Nope. Set that aside for a moment and ponder this which I have taken from my studies on the Easter Rebellion earlier tonight. 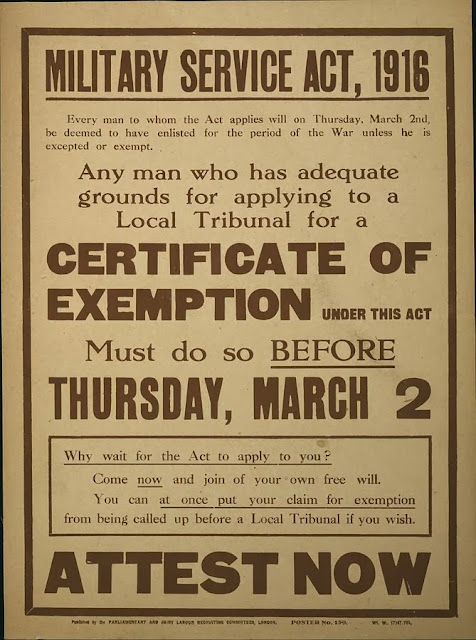 The liberal government of H. H. Asquith, not content with slaughtering all the young men in the trenches in Ypres which claimed the lives of almost half of Britain's professional Regular Army, passed an Act that, as you can read above, declared every man in the Realm, a soldier who's life could be spent in whatever manner the idiots that ran Britain and the British Army thought appropriate. And from the Somme to Gallipoli and a thousand places in between, they spent those lives like they had no value at all.


The Act specified that men from 18 to 41 years old were liable to be called up for service in the army unless they were married, widowed with children, serving in the Royal Navy, a minister of religion, or working in one of a number of reserved occupations. A second Act in May 1916 extended liability for military service to married men, and a third Act in 1918 extended the upper age limit to 51.

The politicians and the generals ate men with wild abandon and some people are a dismayed by a weird scam of a fiasco wrought by odious civil servants and wretched Health Industry Professionals who teamed together to destroy Health Insurance in America and gut the gullible? Please.

The problems with Obamacare are so beyond the Pale that I think they may have overreached far beyond their worst nightmares. Demanding all our financial data and other info covered by the Privacy Act and HIPPA and telling us at the same time that there are no guarantees that the data won't be used by others for any other purposes they choose, is irritating.

What do bureaucrats do when doctors opt out of practicing on the Obama plantation and decide to eschew any new medicare/medicaid patients. They may well not take any of the insurance offered by the new Health Insurance Industry heavyweights. You and I know that the bureaucrats don't care because they have no skin or kin in the game.

Time will tell. Me? All I ever get when I visit the doctor is an invitation to lose weight and some vitamins. Do I ever get the good stuff? I do not.

Posted by HMS Defiant at 7:30 AM
Labels: bore-sighted on the future, civilization, social war