THE FOOLISH IMMORTALS* AND HEREDITARY MAILMEN

For no particular reason other than that I was reading earlier about home ownership and the twisted dickens known as Rent Stabilization which appears to make renters owners in all but name, I wonder if this country is far from passing jobs in the civil service from father to son as we do our elected offices. I read a fine memoir of an American sailor who retired at the end of the 19th Century. As I recall he wrote of the great Reformation in America when the Civil Service was created and Patronage was tossed on the ash heap of history. This was of great interest to him because for generations the duty of post master and light keeper and other public jobs were allocated as the spoils of the elected party. Politics was extremely personnel back then. Not like now....nope.
A no-acount or indifferent job holder could not be fired or disciplined because he got the job through his power to get others to vote and the ward-heelers and political bosses knew it.

These days it is the same but different. Now we can't get rid of, motivate or promote civil servants because it is all done by the unelected bureaucracy beholden to nobody at all. See? In the last century one could fire a poor performer every time one Party replaced the other at election time. Now, all we get to do is hire more and more people to outnumber the incumbents left from the previous administration without being allowed to terminate any.

What we have today is an almost entirely politicized civil service with incumbents stuffed with zeal following their own agendas and making their stupid fantasies the regulations that control and regulate every aspect of life in America. They work in the EPA where they declare a ditch to be a public waterway or wetland subject to the most onerous control or suddenly decide that it is against the rules to burn coal. They work in the Justice Department where they concoct hate where they like and claim to see it everywhere so fond of it are they. We see it in school teachers who react in horror at the mere picture of a gun that little Johny or Suzy drew never mind that every blessed door to every school in this country has a graphic on the door 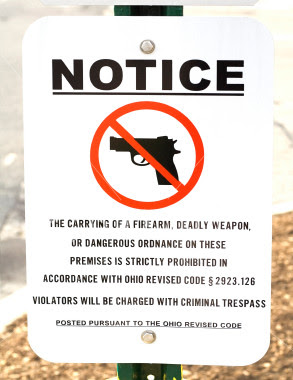 I was never taught it but I learned it nonetheless; unless a thing is specifically forbidden, it is authorized. Some of the things I feel authorized to do are perhaps better done in the dark or after hours and it pays to know that. Knowledge sometimes is its own reward. But if we look at that sign above do we see an exemption carved out for anybody that lets them carry a deadly weapon in that place? A cop will assume that anything at all that he wants to do is legal because the laws don't apply to the police. Teachers on the other hand will assume that a sign with a red line through a picture of a gun means that it is also very much against the law to have a picture of a gun on the school premises and act accordingly. You see how we have a wildly divergent interpretation of the law right there.

There is nothing wrong with following a parent into a trade or business when it is the business of making money. A lot of farmers were raised by farmers. A lot of lawyers are children of lawyers. A lot of military had a parent in the military. But it says something profound about a country when the public jobs become hereditary and are inherited like rent controlled apartments in New York City. There are crafts that are practically closed to outsiders by the rules of the guild. But the interesting thing is that the closed crafts are not the ones involved in making stuff but rather are the ones involved in teaching and regulating and legislating.

I am not the kind of person that thinks we should pass laws or make regulations about this kind of thing since that's what perpetuates this mess. I don't believe that we need 90% of it so I'd just stop paying for it. It's pretty clear to me that Unions can work in a closed environment and are fundamentally unworkable in a world without tariffs and tightly regulated movement of capital and labor. I don't actually understand how public sector jobs ever got permission to unionize since the bottom line for any union negotiation must be profit and governments do not make profits and there is/better not be, any real attempt to calculate productivity of a public worker since the metrics would quickly assume monstrous form that bear no resemblance to efficiency and thrift.

*The immortals: death and taxes.
Posted by HMS Defiant at 4:36 AM

New comments are not allowed.