INJURED SPRITES OF THE APOCALYPSE

Have the Palestinians been up to their old trick of exporting terrorism to their neighbors again? I'd be curious to see how many of the minions of darkness waging civil terror in Syria are Palestinians like their brothers in Egypt, Lebanon and Libya. It's at times like this that I can hear the faint declaration of those willing to die for their beliefs and their Gods and rest easy that I am still willing to kill for mine.

Give them time and they will kill anybody for nothing. There are any number of plagues locked away against the day that hasn't come yet but it is not too early to say that what was locked away can be taken out and used this day or the next and there is nothing at all that 95% of the world can do to stop or slow it down. What happened to the New World as plagues swept from one ocean to the other and back again destroying generations in a twinkling of an eye can happen again. Will happen again and this time it will be the witting tool of men who aim to do evil.

People so steeped in death and evil won't blink at using poison gas on civilians, their own civilians if the cause demands it and they won't stop at unleashing all the plagues of ancient times on the earth if they could just lay their hands on them. Sad to say, there's any number of good Germans who will happily sell them to anybody with the money to pay for them.

Rich new lands to repossess in the name of much diminished mankind. Whole continents adrift without a living soul on them. 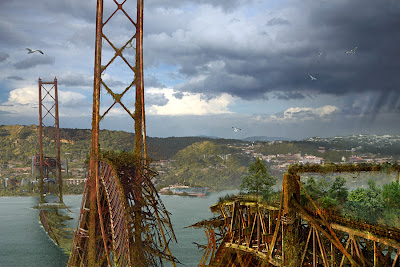 Those of us who made a peculiar study of war on the Korean Peninsula used to opine that the Kim Regime would infinitely prefer to use their arsenals of nuclear, chemical and biological weapons rather than follow the Soviet and Chinese into peace with the West. We anticipated a devastating but extremely local little nuclear war.  The good old days.

And people worry about Global Warming.  Do try to keep up, People!
Posted by HMS Defiant at 12:52 AM