I see that our Navy leaders have decreed that surface warfare officers must now document their skills in a log similar to that used by generations of naval aviators who recorded their flight hours and traps and handy things like how many night hours, night traps in the dark, etc they racked up in the course of flying for Uncle Sam.  I wonder if they let maintenance officers count time spent doing rotor turns on deck for post maintenance checks. But I digress.... 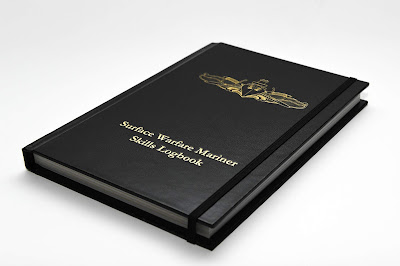 What was somehow glossed over in the reporting on this new skills capture plan was what possible use it would be given that watch standing on a bridge is fundamentally different from flying an aircraft. I don't care what they say, typically we only find one single solitary person is aviating the plane at any given time. Anybody else in the cockpit is navigating, bombing, weaponeering or simply terrified. It's not like that when driving a ship.

The officer of the deck will tell the junior officer of the deck (the conning officer) what to do and the conning officer will tell the helmsman/lee helmsman who will turn the ship or signal the engines to change speed or pitch. In other words, what moves a ship is a cascade that starts from the origin and spreads out to the mix of competence, incompetence, under instruction etc personnel who execute the follow-through. Sometimes what happens has little resemblance or bearing to what was ordered to happen.

What about Tactical Action Officers who stand some sort of unimportant watch where they are held accountable for precisely nothing and what about Combat Information Center watch officers who are usually equally held to no account or standard since it is, after all, a pretty much useless watch station held by someone not qualified to actually drive the ship?  Oh sure, their roles are spelled out in OPNAV 3120.32D,  the Standard Organization and Regulations Manual.

As I read about one ship after another killing its sailors because the commanding officers had put boobs in charge of the ship while they slept the night away I was repeatedly struck by the insane number of people they put into the safety equation which is generally not helped by spreading responsibility and accountability among many. When I was The Officer of the Deck it was clear from the top down that I was 100% accountable for the safety of the ship and sailors. Me. The only people I was answerable to at any level were the Navigator and CO. Not the Tactical Action Officer which we never sailed with and not the Combat Information Center watch officer which was a role similar to purgatory and a position filled by the pen of the Senior Watch Officer because of the damned SORM that mandated such a critter.

There was another book the Navy once used. I'm not sure if they still do since it's been more than a decade since my last sail in a navy sailing craft. A friend of the family at the Naval War College went on later to be the Director of Navy Sailing and he created a log book. Same concept but old habits died hard so each local navy recreation boating facility wanted to keep qualifying every potential boater.


The reward was always there though if you just persevered.

Unfortunately, the way the Navy works is hard to believe. The log book sounds fine but who will keep it up to date since it is pretty meaningless? Who will review it at any point in its existence other than the officer filling it out? Well, this is where the Navy does Navy and mandates a paper record and, AND, a computer log that the Senior Watch Officer must sign off on and review every week or every change of the watch quarter and station bill and like always some jackass will think if it's good enough for the zeros it must be good for the sailors and they will inflict it on all the sailors everywhere and it will soon include hours spent driving a staff car, waiting in a staff car, answering the phone, typing on a computer or hours spent on a riding mower cutting the grass at some dismal naval station that hasn't contracted that out yet.

You there in the back! I can see you! You think this won't happen. Ha! I've seen it again and again and if you think they won't require hard copy and computer record files that match 100% you haven't seen INSURV or the Propulsion Examining Board and both of those served useful functions. Imagine what a CLASSRON staff can do to make life even more miserable for the sailors afloat by imposing this on all of them.
Posted by HMS Defiant at 6:00 AM