Diane Feinstein was once my senator. I left the state. I am sick and tired of anonymous allegations of wrongdoing launched decades after the alleged 'fact'. I refuse to pay any attention to any anonymous allegations by anybody about anybody and I don't really care when they occurred. I think people who launch anonymous accusations that ruin the lives of others should be flayed alive. We can start with Diane Feinstein. 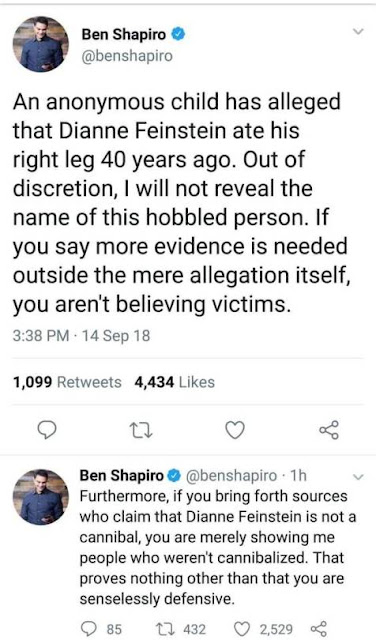 UPDATE:
The anonymous accuser has outed herself and as expected turns out to be one of Satan's Elect on Earth a loyal party Democrat and someone deeply involved in the pseudo-science known now as the  "recovered memory scandal in California." You can google the term in quotes and look at the debunking of the new Salem Witch Trials created by academic frauds who created 'recovered memories' which were then used to destroy innocent people. I was living in Emeryville at the time and it made the news every night for months. This case pretty much sounded the death knell of the false memory witch trials. Naturally, the spawn of satan accuser is in the same fraudulent business and trying to show that perserverance alone will outmaneuver the truth. The truth is pretty damning.