Transparency makes its first appearance after more than 8 years of skulduggery, lying, concealing, misfiling, character assassination, and truth-killing. I'm sure there was a lot of happiness in the White House tonight and I'm sure Sarah Sanders was over-the-moon with delight when her office put out the following statement tonight. 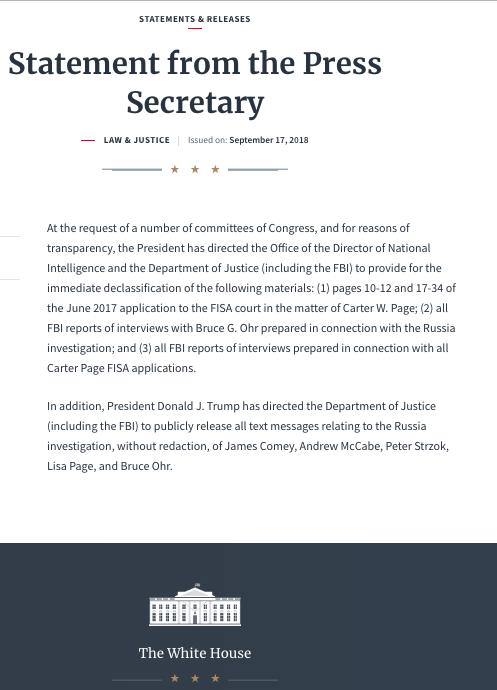 The best is yet to come. This is the little tiny bit of the iceberg of truthiness that sticks up out of the swamp water. Never forget that there is a single definition for national security classification markings and it goes like this:

The U.S. classification of information system has three classification levels -- Top Secret, Secret, and Confidential -- which are defined in EO 12356.2 Those levels are used both for NSI and atomic energy information (RD and FRD). Section 1.1(a) of EO 12356 states that:


(a) National Security Information (hereinafter "classified information") shall be classified at one of the following three levels:

Section 1.1(b) of EO 12356 states that "except as otherwise provided by statute, no other terms shall be used to identify classified information."

As far as we know from the scraps of information gleaned from 2 years of in-depth research into the whole Russia-Trump lie by Mueller and his cronies, not one scrap of the material currently classified at ANY LEVEL is of a nature to cause 'exceptionally grave damage, serious damage or even damage' to national security if it is all released to the public unredacted. The sources and methods of obtaining that information didn't utilize any capabilities that make their information subject to the old catchphrase "classified sources and methods" which was used throughout the Cold War to refer to what were euphemistically known as 'National Technical Means.'

It's worth noting that it is illegal for the National Security Agency to spy on American citizens in the United States and therefore there can be no question that National Technical Means are not an issue in determining whether any information in the hands of the Mueller probe or others is classified by its means of production.

I look forward to ALL of the files being declared unclassified by the President and their broad distribution to the citizens of the United States. I suspect that is his October surprise.

What we've experienced for 60 years has been the overclassification of things that are embarrassing to public officials at just about all levels of government. They cover their screwups by classifying and burying them. The only reason for classification of any of the materials in the investigation is mooted by the fact that they must be produced for any legal case to be made against the accused.
Posted by HMS Defiant at 6:28 PM
Labels: Schadenfreude, Style and Grace