SJW LOSE ABILITY TO SHOCK ANYONE

I'm wondering, what will the various vile outfits that make up antifa, code pink, blm, occupy, etc., do when they finally understand that nobody at all is shocked by the grotesques that they manifest with such natural lack of style and grace? You know, when you look at a thing like this and go, ah, the pea-brains are at play again and you just move on. 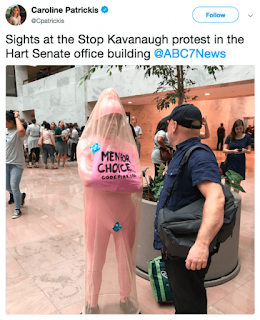 It isn't just that it is ridiculous and over the top. It isn't amusing and it isn't particularly shocking given the number of idiotic things the code pink movement and follow-on movements, whatever they call themselves, get up to these days. What it clarified for me tonight is that it simply isn't all that shocking and is fairly typical for those who identify with movement issues beyond the bounds of decorum, reason or sanity. You know, the kind of people that insist that their angst and hate issues outweighs the will of the majority in a Republic.

I know what the taliban did when they decided to shock the world and show us they meant what they said. They acted in line with past behavior of their kind of muslim religious fanatic and they started blowing things up. They started with cars and people and buildings and thought they'd top that and show the world they meant business and details can be found here. It is fascinating reading. They blew up the 5th century statues of Buddha because the statues were incompatible with their world view.

Not to be outdone, the Islamic State in Iraq and Syria followed the ordinary muslim practice of sudden onset radical fundamental religious madness and initiated their own vicious attacks on cars, buildings, people, whatever crossed their path and then decided that what really needed to be done was reduce ancient Palmyra to utter ruin and they devoted considerable time and effort to destroying all that remained of the city named Palmyra.


With all the forgoing, what do you imagine is going to happen when antifa and blm and the rest of the far left social justice warriors decide we're not taking them seriously anymore? Most of us never really took them seriously since we tended to view them as the violent outgrowth of lunatic fringe morons such as code pink. They all think they're following in the footsteps of MLKjr and the civil rights demonstrators and freedom riders and haven't yet grasped the fact that they are more akin to Mao's Red Guard and Cultural Revolutionaries and we all know how that worked out.

Sadly, the real outer fringe of lunacy in antifa and blm may be deciding that perhaps a red guard isn't enough and what they need to do is call our attention to them by resorting to atrocities along the same lines as the taliban, isis, isil and pol pot.

Before I became familiar with Mueller and Comey I used to not worry over much about the radical fringe since I figured that the FBI was keeping an eye on them. Now that I've seen the upper echelons of the FBI, DoJ, ATF, etc. at work, I no longer have any faith that they could find their way out of a wet paper bag.

I expect if things don't go down in the special counsel's auto-da-fé as arranged by the lunatic democrats, the pipe bombs will start turning up all over the place in an effort to show the justice of their charges against Trump by blowing up little kids on the Mall or trying to truck bomb the Lincoln Memorial because he was, after all, a Republican.

These groups have a nasty habit of random violence.
Posted by HMS Defiant at 5:52 AM