This wonderful story is absolutely fantastic and made my day. Read the whole story. It's a hoot.


Thanks to a little-noticed auction sale, a South Bay couple are the proud owners
of one of the most exclusive streets in San Francisco — and they’re looking for
ways to make their purchase pay.

Tina Lam and Michael Cheng snatched up Presidio Terrace — the block-long,
private oval street lined by 35 megamillion-dollar mansions — for $90,000 and
change in a city-run auction stemming from an unpaid tax bill. They outlasted
several other bidders.

Now they’re looking to cash in — maybe by charging the residents of those
mansions to park on their own private street. 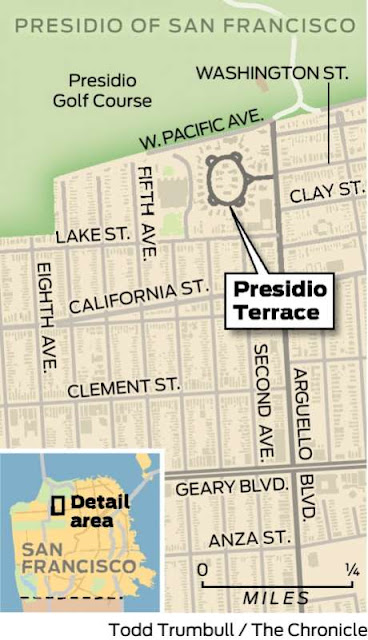 Those residents value their privacy — and their exclusivity. Past homeowners
have included Sen. Dianne Feinstein and her financier husband, Richard Blum;
House Democratic leader Nancy Pelosi; and the late Mayor Joseph Alioto. A
guard is stationed round the clock at the stone-gate entrance to the street to keep
the curious away.

So imagine the residents’ surprise when San Jose residents Cheng and Lam wound
up with the street, its sidewalks and every other bit of “common ground” in the
private development that has been managed by the homeowners since at least
1905. That includes a string of well-coiffed garden islands, palm trees and other
greenery that enhance the gated and guarded community at the end of Washington
Street, just off Arguello Boulevard and down the hill from the Presidio.

Did you ever wonder how all these democrats who spent a lifetime in 'pubic service' always seem to end up worth millions and are the dominant fat cats in every municipal puddle? We should pass a law forbidding them to own houses worth more than their annual salary and limit that to no more than $100,000/year and we should also forbid them to own guns or speak in public. I mean, why not do to them what they do to us?

UPDATE:
Doesn't your heart just bleed for them? Look at their neighbors, the Little Sisters of the Poor and the Presidio Golf Club. 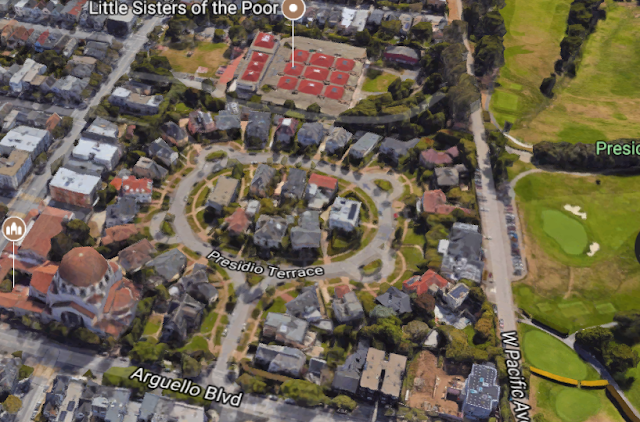