I STARTED A MOVEMENT ONCE

I also kicked off a couple of phrases. I was a staff officer at Naval Forces Central Command. I was there for one particular reason and I did it. Unlike every other staff officer in Bahrain, I had to go and start up some 5 ton and deuce and a half trucks, a couple of generators and walk a water buffalo every week or two. As the cognoscenti here know, unless you 'exercise' the vehicles and the road gear, they don't work. I had a full set of surveillance gear prepositioned in the Banz warehouse next to ASU. It needed to work. As it happens, we used it, a lot.

Wearing khakis to do this resulted in some really crappy looking uniforms so I started to wear my desert weight nylon ripstop cammo to the office. I was soon joined by the new MCM commodore, then by the EOD officer and finally, reluctantly by the SEAL. We shared an office trailer known as cats and dogs since we were kind of unique.

Soon Admiral Fargo was wearing ripstops and after that, everybody on the staff except the COS. He was the one that stood to argue with the N2 during the admiral's update one day that if we wanted to put ships into the Caspian Sea we could, at any time....dammit. P3 pilot doncha know.

I really shouldn't laugh. He left us in Bahrain to, as I recall, become the same thing to COMNAVFORJAPAN and then left the service, entered the SES and became deputy to the admiral commanding whatnot in Texas where I bumped into him once again. Out there in Japan he relieved a man I knew, from personal experience, to be the stupidest officer in the naval service and that includes the Marines. He competed with J.K Sapp for the title. Unlike Sapp, to the best of my knowlege, Terry never held command.

As I recall, he could read about 4 words/minute. His office floor was stacked waist deep in all the things forwarded to the admiral for his signature. CAPT C never really understood that the job is not to rewrite every damned word, just move them out.

OTOH, I know some parents that never grasped that. My own? They charged my little brother rent and made him pay to install his own phone line. Their revenge? They made me take him to California with me and live in my place. I think parenting classes must teach them to show no mercy. I'm sure glad I never took such a class.

Why we don't stick any ships in the Caspian Sea. A ship would need wheels. 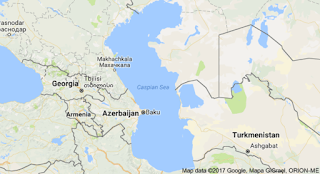