NEW HEADQUARTERS FOR THE FBI

I see that the Senate is slowly moving, like a glacier, towards the idea of giving the FBI what it craves and that is a new office building where they can be all kinds of secret agent/killer sniper/rambo stokers and why not. Surely their current headquarters aptly named for the founder and long time fuhrer of the FBI, Edgar Hoover, is replete with ghosts and failure as they failed to notice just about every single spy in this nation's history and whose only claim to any kind of fame left with lliot Ness and he actually pre-dated the FBI. 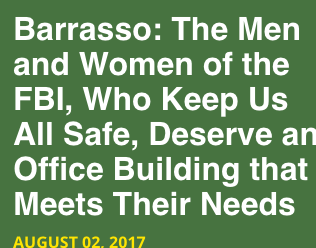 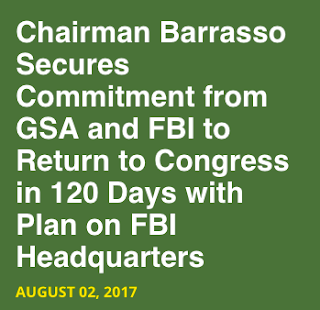 That said, I'm in favor of giving the FBI the new building it deserves and needs and with that I place my full support for building the brand spanking new FBI HQ in El Paso, Texas. That will put them right there on the front lines on the War on Drugs, War on Poverty and the War on Terrorism and it's not like they really ever accomplished anything in Washington, DC. In all the time they've been there I don't believe they've discovered a single crooked Congressman, Senator, Judge, Presidential candidate or even noticed that the Mayor was a frequent star in crack cocaine movies.

If they feel that El Paso poses too many problems on account of crowd density and such I'd be OK if they built it in Juarez. That way, maybe Trump could get Mexico to pay for it.

Somebody with access to them is leaking the complete transcripts of the President's phone calls with other heads of government and state and the FBI and the rest of the clowns in the swamp seem to be taking a hands off approach to solving these crimes. They don't appear to be doing anything. As it happens I believe what they are doing is treason and should be treated as such.

The editors of the Washington Post and the writers responsible should be forced to tell who is feeding them these classified documents and if they refuse they should be locked up for contempt for about 7 years. I have no problem with that at all. After all, when is the last time the 'so-called press' leaked anything detrimental to any democrat or liberal politician?

These guys in the media are no different than the Communist Party and their goal is exactly the same, they want the destruction of the United States and a revolt against the duly elected President. Let them enjoy a little vacation and gain a sense of perspective. It will do them good and it will improve the level of civility and reason in our country.

They can also either lock up or shoot down all the fascist rioters from Antifa. I'm indifferent but shooting them is cheaper.
Posted by HMS Defiant at 6:00 AM
Labels: Socialism, stupid and vicious, Truth