GORE BLOWN AWAY AT BOX

I think it is kind of funny that the new Weathermen will downplay the utter failure of Gore's latest pack of lies to lure audiences into the theater to be lied to again. What is really funny is how they're going to have to spin it after the buildup they awarded it all by themselves. 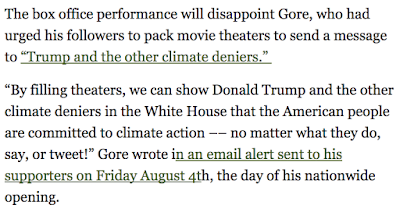 Gee, do you suppose that failing to fill the theaters shows Donald Trump and the rest of the sane people don't believe in the scary BS future Al Gore and the criminal climate data pirates at the various universities here and in Britain have been pitching for over a decade? I'm sure that's not how they're going to pitch the failure of the masses to show up and urge a climate revolution before, for the 322nd time in this century, it is TOO LATE TO CHANGE!!!!!

OH NO! The world is doomed.