I took a picture of this car Saturday when I stopped in Annandale to buy some cheese and grapes before taking a massive number of balloons to a birthday party. It didn't strike me at the time that the Human-Rights fascists were not the only ones driving fascist killing machines. I didn't hear about the death and injuries done to fascist rioters by another type of fascist until much later in the day. Still, this pretty much says it all about where the Human-Rights types are coming from and who they hate.


I kind of wonder if the driver took off that little sticker after a man deliberately used his car to run down a bunch of fascist thugs and assholes rioting in Charlottesville just down the road earlier that day. If not, it certainly would break my heart if some fascist tossed a pile of flaming gasoline soaked rubbish into the car the next time it shows up in public. 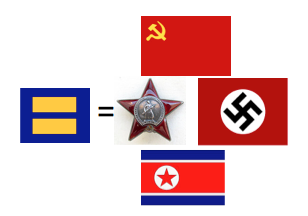 I forget where I saw it on Sunday as we drove back home from Virginia, but I laughed out loud as I read that it appears that the forces of international socialism just clashed with the forces of national socialism. Could not happen to two more deserving bunches of scumbags.
Posted by HMS Defiant at 6:00 AM
Labels: Orcs, scum, social war