There's never a language cop around when you want one. OTOH, who really needs a language cop? After all, that's what we have folks like hardcore fascist lena dunham and the rest of the hysterical fascist liberals and progressives for, to keep us on our toes about minding our Ps and Qs.

I laughed out loud when I was reading The New York Times Ethics columnist in their Sunday Magazine this weekend. He had some "ethical advice" about an everyday sort of common occurrence. I started to wonder if the language I grew up with had changed that profoundly or was this just another one of those routine inconsistencies the NYTs is famous for. 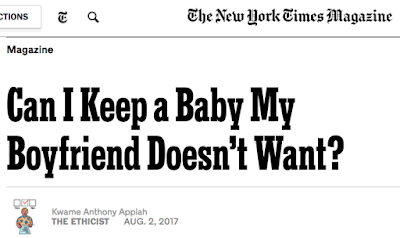 I'll skip over the so-called "ethical" advice and just lash them with this little quote from the article:

There are practical and legal consequences to consider. I’m not a lawyer, but as a general rule, a father must help support a child even if he didn’t want it. Otherwise every deadbeat dad could claim to be an unwilling one. And of course, he cannot force you to have an abortion. (I am not going to consider the question of whether abortion is morally permissible: You think it is, and I respect that view.)

Do you know what the definition of ethics is? Here ya go.

I don't think that the New York Times Ethics columnist thinks that word means what it means. Perhaps they could find a new ethics columnist who actually understands what ethics are. As with slavery and the courts, I think we can draw a very bright line between that which is morally permissible and that which is legally permissible, or, to put it as it was argued, what is not morally permissible even if the law upheld it at some point and declared it perfectly legal.
Posted by HMS Defiant at 7:00 AM
Labels: America, Education, integrity