Yes, yes, I know. All of you guys knew about it a long time ago but for me it was news. I stopped by Henderson Hall just to hit the Exchange and have a look at their computer prices when I was amazed to find this sign at the top of the escalator: 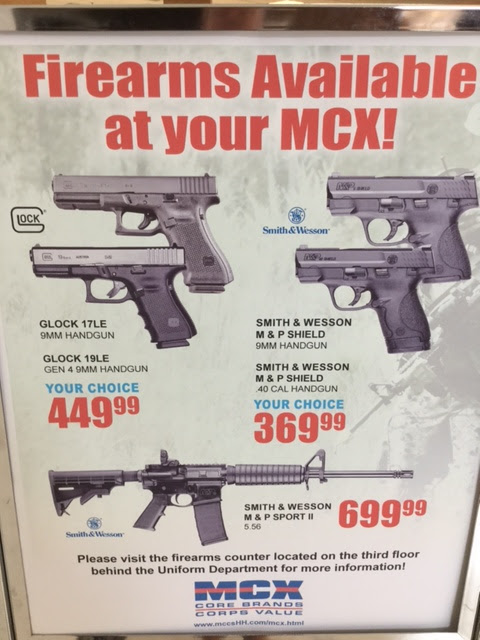 I bought my first 1911 model Colt .45 at the Exchange at MCRD San Diego over three decades ago and a year or so later I found that the Marines were no longer in the arms sales business, at least as far as their exchanges were concerned.

I never thought they'd come back to their senses and start selling quality weapons in the Exchange again. In my experience, once a bureaucracy commits a stupid and egregious error it never ever changes its mind and reverses itself. In this case, somebody did and they sell guns at Henderson Hall and that must drive the nuts in the District of Columbia batshit crazy, but that's OK, since the readers of this brilliantly informative blog know, whenever the military holds Twilight Tattoo at Fort Myer all the heavy artillery is pointed directly at the Capital Dome across the river.

There's a certain amount of both symmetry and irony in that. They are firing cannons over the former grounds of a noted Virginian named Robert E. Lee and their weapons are located in the home of the Army of Northern Virginia and pointed right at the heart of the government of the United States. It's the kind of thing that could only happen with a ceremonial unit like the 3rd Infantry Regiment and a certain amount of tolerant acceptance from the various Chiefs of Staff who live in the quarters along the southern edge of the parade ground where they usually hold Twilight Tattoo.
Posted by HMS Defiant at 12:00 PM
Labels: Discovery, guns, News