READINESS AS A STATE OF BEING

Are you Ready Now?

Do you find it interesting that we remember this date every year but we never 'stand to' for it like we do for each anniversary of 9/11? The country is still at war even if the president and Congress no longer are. We have come to expect that the State will do nothing to prevent further attacks except engage in painful and absurdly useless theater.

In war there should be no surprises. No unexpected dawn attacks. No ordinary day.

The link at the top contains an interesting report on the damage and loss of many of the United States Navy's destroyers during World War II. Tough little ships.

The unspoken corollary was never spoken of. It was never even mentioned. Could any duty section get the ship's main battery into action to repel an armed attack? Would you like to see the effect of small arms and machine gun fire on a ship? Below is the ex USS O'BANNON DD 987 after being hit with Harpoon missiles and 5 inch gunfire. It is now being fired at with the weapons warships use for self defense against terrorists.

This was released today and shows that forces were available for instant deployment to Benghazi on the anniversary date of 9/11. This is no surprise since we spooled up every year for a number of anniversaries that our adversaries believed should be celebrated by flooding the streets with American blood. This was sent from the Office of the Secretary of Defense to Clinton's Deputy Chief of Staff and 2 other high level drones at State Department then being mismanaged to death by Hillary Clinton. You can see the date and the time below. 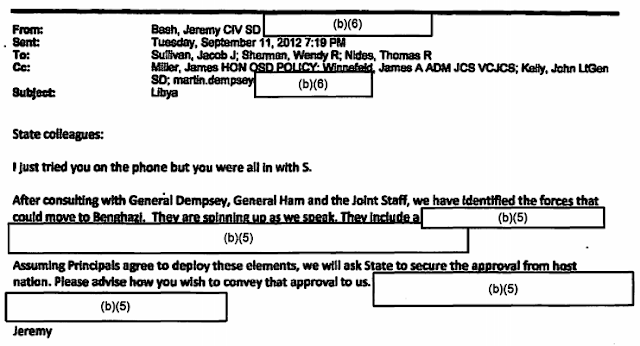 The following is wikipedia entry on Jeremy Bash. Some Harvard Law grads don't 'test' as well as others....