A LITTLE SOUTH SIDE OF CHICAGO

The Mayor of Chicago is displeased now that we know he is planning on spending his vacation in the only part of Chicago where "Gun control works Dammit!!" The Mayor was heard to scream, 16 bullets! Jesus Christ, it doesn't take 16 bullets to kill a boy! One would do it! The Mayor went on to suggest to his new Police Commissar that he arm his troops appropriately and give them some real firepower so they don't have to reload Go& Dammit!

The mayor called in his federal buddies to conduct real training on how to take a boy into custody. 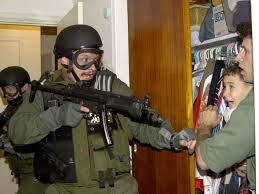 The new commissar did get the mayor to admit that the only reason there was no gunfire in that incident was because his federal buddies have shown an overwhelming enthusiasm for killing babies, innocent young women or anybody else they find at the place where they just created a crime scene.

The mayor and his family are looking forward to their vacation in the kleptodystopian paradise of the Republic of Cuba. Mayor admits that the swim back to Miami will be "bracing but at least with global warming we won't freeze in the equatorial Gulf Stream as we swim to the US with the poor Cuban refugees migrants who can't afford a ticket or a boat."
Posted by HMS Defiant at 5:27 PM
Labels: American royalty, cannibals, Orcs, Palace News