Look at the last half dozen posts. The picture of the bullfighter was memorable. [UPDATED] 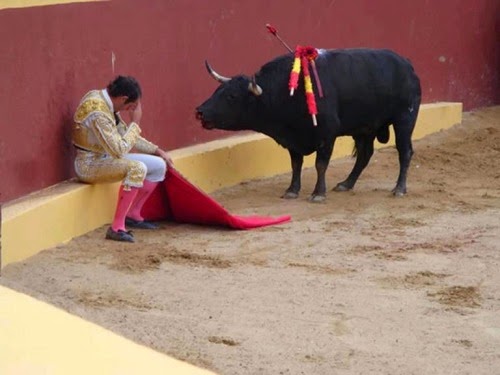 This incredible photo marks the end of Matador Torero Alvaro Munera’s career. He collapsed in remorse mid-fight when he realized he was having to prompt this otherwise gentle beast to fight. He went on to become an avid opponent of bullfights. Even grievously wounded by picadors, he did not attack this man.
Torrero Munera is quoted as saying of this moment: “And suddenly, I looked at the bull. He had this innocence that all animals have in their eyes, and he looked at me with this pleading. It was like a cry for justice, deep down inside of me. I describe it as being like a prayer - because if one confesses, it is hoped, that one is forgiven. I felt like the worst shit on earth.”