MEMENTOS OF WAR AND FATHERS

I was reading today over at The Mellow Jihadi and one of the posts there struck a chord. It was an article about the family of a brave soldier of the Great War who had left behind his medals after his death. His son wrote and said that his children didn't want them and that was why he was putting them up for sale. There was outrage that the children didn't want them. I don't see why.

There are a lot of medals in my family. We've been doing the military thing since before this was a country. My grandfather's medals were nicely mounted in a velvet backed picture frame by his wife after he died. They look pretty good. These days they hang on the wall in one of my parents guest rooms. My younger brother has asked to have them when my parents are done with them. 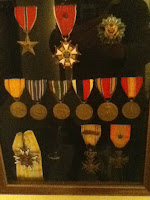 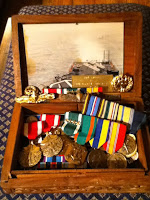 My father has a number of medals but his are kept just like mine are: out of the way and stuffed in a box.

The few times I wore a uniform in the last 15 years that allowed the wearing of ribbons I only wore three of them. The rest accumulated in the box I bought as an Ensign in Karachi in 1984.
When I went back to San Diego to sort through all that remained I came very close to leaving mine behind. I don't wear them and don't ever expect to wear them again. I never got around to actually mounting most of the later ones because the only time I ever wore them was at weddings. I don't think that they're anything my daughter might want because, if we're honest, the mementos that anyone has from previous generations are the things one's mother saved and passed down.

In my family, I expect mementos of my father will be some some photos, guns, swords, medals and the memories of a truly amazing man who engaged in a lifetime of learning and love for his family. I wouldn't ask for more.
Posted by HMS Defiant at 10:00 AM
Labels: fathers, Memories