Guided missiles now in the hands of Omar Mohammed Osama. The video is movie imagery taken from a drone flown around the Golden Gate by some radical enthusiasts of first person flying without leaving the ground. I wrote a few months ago about the day coming soon when the public wakes up to the idea that these things can be bought just about anywhere or made even more easily than printing a gun. What would you do with a guided missile or two?
Back in 1914 when the first knights of the air took to the skies over Europe in their flimsy little planes they were strictly observers. They flew over the terrain and reported back on enemy dispositions and weaknesses. Then some clever little bastard thought it would be cool to bring along a gun and maybe a few hand grenades to make the other fellows afraid. That's what we can expect to see again as private hands obtain and weaponize remote controlled aircraft. The models today are usually small and made of lightweight radar transparent materials in order to carry the largest payload of fuel and optics. But what if you trade range and optics for lethal payloads?

A lot of people who ought to know better always assume that the people that hate us are stupid ignorant peasants. Ahmad Shah Massoud, the Lion of the North, was blown up by bombs delivered by a couple of muslims claiming they were a European TV crew. The camera power supply was replaced by high explosives. The date of the attack was 9/9/01. Vicious, merciless, fanatical yes. Ignorant? Not all of them.

Watching this film and the others brought to mind again what it takes to stop a determined enemy who could make such devices on an assembly line in a garage in Alexandria and fly them across the river one night after dark. One doesn't have to be a Mitchell, de Seversky or a Douhet to see the power that is in these little things to do harm. Oh sure you say, they're tiny. But what if 20 of them came at the same time? And how do you stop them?

I don't think we'll invest in too many Iron Domes or CRAMS for INCONUS use. Wouldn't that be a sight and sound though to see and watch from the Reflecting Pool or Tide Basin. The CRAM fires 3000-4500 bullets per minute. Watching the tracers is like seeing a laser beam at night. There is a downside to blowing holes in the air in defense of infrastructure. It's called impact. What goes up will come down.

Hopefully the hideously expensive version of these 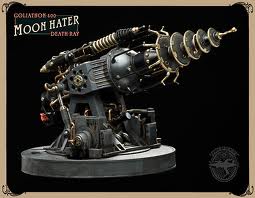 are already in place, tested, ready, mated with a radar fire control system that can detect the feint traces of such stealthy adversaries. (Note: I inserted a picture of a crummy deathray because there are no cool pictures of laser cannons yet. They're still too highly classified for blogs.)

I expect that countermeasures are already being whipped up to defeat these threats. The first one that springs to mind is to jam the radio spectrum in the vicinity of all likely venues. Perhaps. Of course the drone could be controlled over IP which means actively jamming the 802.11 spectrum too. Back in the day we knew an attack was imminent when a ship maneuvered to unmask its missile battery and started throwing missiles up out of the magazine onto the missile rails. I expect in the future it will look an awful lot like an internet denial of service.
Posted by HMS Defiant at 1:03 AM