THIS IS STAR WARS

USS Lake Erie firing an anti-ballistic missile. It's designed to hit things moving at damn near orbital speed. It's a kinetic kill vehicle. That means that the last 23 times these have been fired, there's been a tremendous release of energy as warheads hit each other at thousands of miles per hour. None missed. 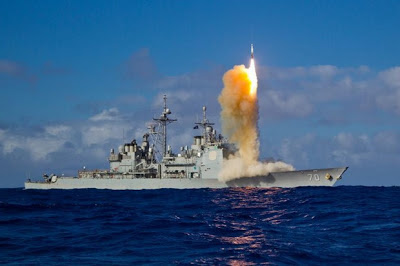 I don't know how well they would do against the current crop of these: 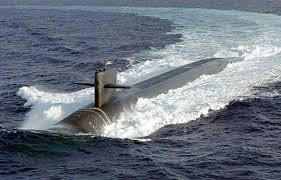 That is the USS Michigan. She carries more than a 150 Tomahawk missiles. They fly much slower and lower than ballistic missiles. USS Lake Erie's missiles could hit them but she would run out of ammunition long before she shot down that submarines entire payload.

USS Michigan is a recycled warship. She was actually built in 1982 and armed with 24 Trident ballistic missiles each with 8 independently targeted reentry warheads. That would be 8 city killing warheads x 24 missiles = a series of unfortunate events. 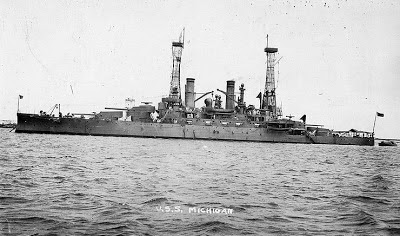 USS Michigan at the turn of the century was a battleship of the Great War which could almost hit enemy ships maneuvering up to 20,000 yards away. The fire control system could not really overcome the optical/time dimension in play though so it was thought that the ships couldn't really successfully hit anything beyond 10,000 yards. The nearly insurmountable problem inherent in the system was that the fall of shot needed to be witnessed in order to adjust the next broadside to get closer to the target. The time of flight of the shell flying through the air over 5 nautical miles meant it was a long iterative process and then the other blasted ship would maneuver, throwing off all the laborious calculations. Bastards!

Some pondering points:
That old battleship's guns could only fire about 175 shells before they burnt out the barrels. That was a badness.
For almost 50 years there was NO way to shoot down incoming ballistic missiles. Wild eyed optimists came up with technical solutions each scary enough to qualify as insane. I don't recall any atmospheric tests involving anybody, navy, army or air force attempting to test a nuclear tipped Terrier, Nike-Hercules or Bomarc against aerial or ballistic missile targets. OTOH, they were pretty insane.
Why did we opt to put a thoroughly tested working anti-ballistic missile on warships instead of somewhere useful? It was a MAD world after all. 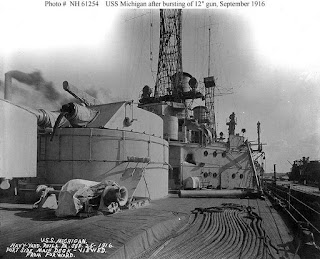 One of the gun barrels blown apart on a battleship turret when the barrel failed catastrophically. You can see one of the holes it made in the ship right in the middle of the picture.
Posted by HMS Defiant at 8:30 AM