I have always liked books 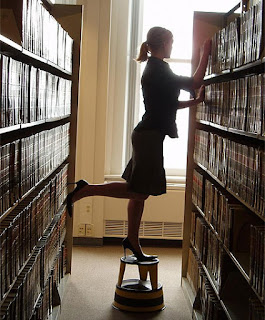 for one reason or another.

This is an interesting article about a newly re-opened library in Liverpool, England. It appears to be a magnificent place for books. The pictures in the article show a fine looking library but there are a couple of concerns that I have about what libraries have become now that the bottomless pockets of government are building replacements for the simple libraries built with the generosity of Andrew Carnegie and others like him who believe in the power of reading to raise us up. The council of the city have elected to fund this library using something they point blank refer to as a Private Finance Initiative scheme. It is, in short, yet another scheme where those elected to look after the Public's interest delude themselves with the idea that they can achieve something worthy and valuable for "FREE". 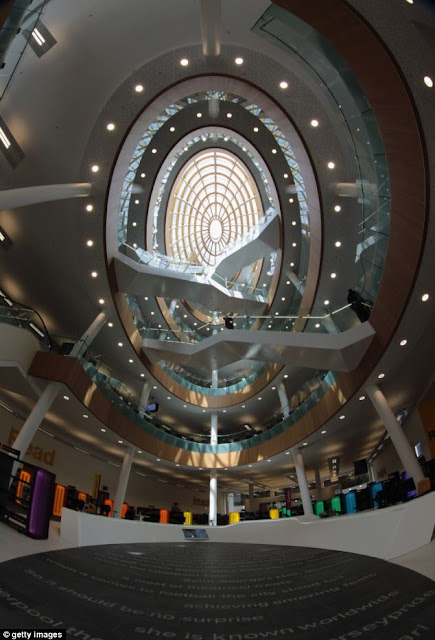 That's a view looking up toward the skylight dome in the ceiling.
This plaque commemorates how libraries used to be financed. I think it a much more worthy means to achieve the desired end. 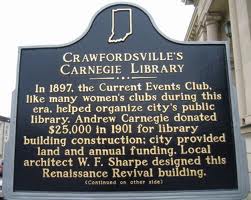 In Akron, Ohio, this is the library that Carnegie paid for, still there: 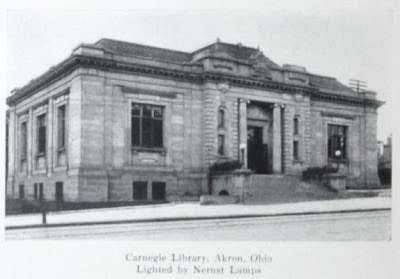 Above that door in the middle of the building, chiseled into the stone, it says, OPEN TO ALL

My experience with the central library mania that bites cities all over the world is the crushing compulsion to build bigger, higher, wider, with more open space and a very important architect. Of course to get there they are forced to shutter the main building for years while rebuilding and close down branch libraries in the outer parts of town and to scale way back on library hours and subscriptions. I remember dropping in on my City Hall in Solana Beach one night (I lived across the street) and listened to almost an hour of debate from a twit in the audience demanding to know how they could justify $2,000 for new books and magazines at the town library. But perhaps that's what's needed. A nickle and dime mentality on the building committee and somebody smart enough to know that taking out a loan for $105 million now, not paying any interest on it for 20 years and then starting to pay it back over 20 years means that those folks left behind will be paying almost a billion dollars for that "FREE" loan.

I'm OK with vanity projects but if we stick the next 3 generations with the bills for them,
they're bound to be a little grumpy paying for this.