The German and French ministers put me in mind of this picture. 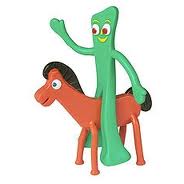 Germany's Finance Minister Wolfgang Schaeuble (l.) and his French counterpart Pierre Moscovici shake hands during a news conference after a meeting in Berlin Tuesday. Mr. Moscovici called on Germany Tuesday to be flexible and respect Europe's diversity and not just focus on rules and discipline, in comments that signal the differences between the eurozone's two largest countries on how to solve the debt crisis.
Tobias Schwarz/Reuters
Posted by HMS Defiant at 8:03 PM