WHY WE HAVE ROPE

I saw this at another blog and thought about it for a second. It's true. I too, never voted in another California election after this happened but then, my vote never counted there and by the time the primaries reached us, the country had already winnowed it down to one die-hard commie and one loser moron. It really wasn't worth the trouble, but most especially after Prop. 8 got tossed AFTER THE PEOPLE VOTED FOR IT.

Just remember when people tell you elections matter that it is your duty to vote for the party that doesn't always use the courts to legislate. Why would you give up all your power as a voter to a non-elected lawyer who finds penumbras or whole-heartedly believes in discrimination now! Discrimination tomorrow! Discrimination for 20 more years!

Srsly people, it's time to take back the power of the people. Imagine, you let an Ethics Body of this Congress or the last 10 Congresses, toss out the will of the voter because a handful of politicians held that the voters had elected an unethical man. It's not like THEY EVER DID.

Vote for Ray Moore or don't. I don't care. I just despise the way the democrats keep leaping to any and every way to disenfranchise the voters. It's not enough that they encourage their true believers to shoot and kill republicans, they keep wanting to use law to make republicans ineligible to play in politics. 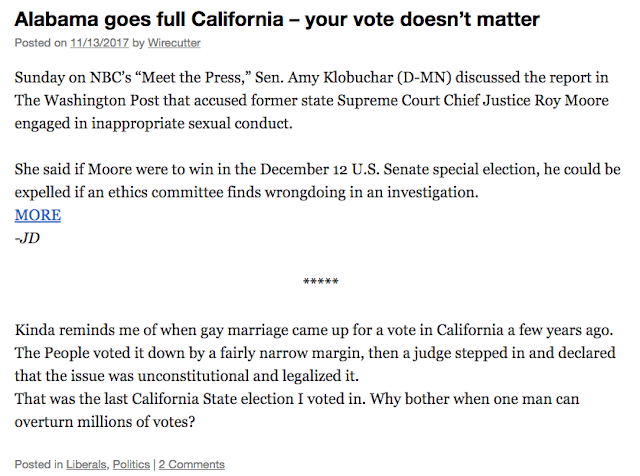