I KEEP DOING IT

Because it's just a matter of time. Donna will be dead in a week or two. It's the Clinton/Democrat way. 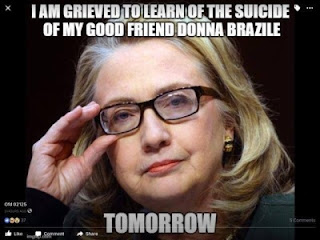 Come on, admit it. When is the last time you heard of any Clinton namer other than Trump who remained alive this long? Go on and wonder that Trump has hired and retained his own secret protection because he has more smarts than to trust Hillary's penetration of the pathetic remains of what was once the useless Secret Service who seem to have allowed just about every single Republican President to be shot by killers.

I'm not all that sure that shooting Hillary or Pelosi in the head would "do them an injury". Just sayin.
Posted by HMS Defiant at 1:02 AM
Labels: Education, Trust