For me, it was one of the early Star Trek movies when Shatner and the vulcan were on a city bus in the Bay Area and wanted that jerk to turn down the insanely loud ghetto blaster boom box and, being white, he told them to get lost. That's what we white people do. Still, I found this today on my blogroll and while technology can take the ghetto blaster out of the ghetto, it can still offer a stylish alt.

Srsly, could those ear pieces be bigger? Sure they could!!!! They need some bakelite!!!! 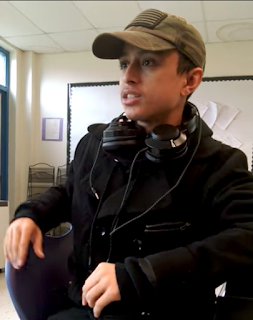 Some people, used the vulcan ear clips for awhile and then cringed to death in shame a few years later and some of us use tiny little earbuds and so appear insane to those who cannot hear the music.  This guy is gunning for Sky Captain or Sky Admiral. OTOH, he made a good point well and held up in a debate wtih what passes for a high school teacher these days,

You know, I kind of miss the old days when centaurs were hired to instruct the young.
Posted by HMS Defiant at 10:42 AM
Labels: Education