I CAN SEE WHY THE ARMY GAVE UP

I didn't bother to read the article about the Army deciding to let in more criminally insane or simply insane losers like the one the Air Force hired who went on to massacre 26 people and shoot another 27 because he felt like it after they decided to do the sane thing and kick him out. I mean, why bother?

Drudge pretty much nailed it in the usual fashion. These are who the Army thinks belong in the Army, alongside their Air Force brethren because, "hey! who says you have to be normal to fit in?" 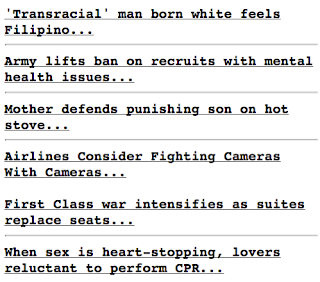 Juxtapose leads to ontology or whatever.....
Posted by HMS Defiant at 3:13 PM
Labels: America, Orcs, Peace and Harmony, stupid and sublime