THE ZOO OF PAPER TIGERS

I think it's fascinating that his Imperial Majesty Barrack I (and oh yes, I know how to spell  the Imperial Hoheit's name) has, despite his "pivot to Asia" not made any effort whatsover to restore any interest in reviving the Zoo I sure that about .000005% of the reason for rejecting the idea comes from the Pentagon because His Somnolent Highness doesn't pay any regard at all to what comes from Arlington's 5 sided wind tunnel. I think it has to do with the fact that Barry is Indonesian and he figures that restoring SEATO would be worth about this much to the region. 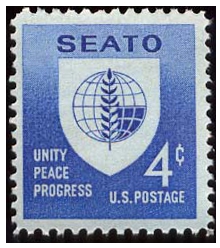 In point of fact though, I'll grant that the countries on China's flanks survive at the mercy of China much the way Mexico and the Banana Republics survived ours during the early years of the Republic. There was nobody who could do anything to stop us and only our restraint served as a brake to continued expansion. The forces that drove us back then now drive China and I wish the former signatories to the Manila Pact every success in negotiating their independent paths to making a deal with China.

If it's any balm, the Chinese will probably have to first take out Vietnam and those people have shown themselves to be unbelievably, almost fanatically, stupid nationalists. They'll fight for generations if China attempts to impose by force what it fails to impose economically. While, ordinarily, that would give the other nations on the rim a chance to unite for the common defense, well, that's not going to work either.

Still, we are blessed now with rational leaders in China. The madness and insanity seems to have burned itself out for now. It's reassuring to know that the current leadership kept excellent records and know exactly how to respond to the very first sign of revolt. We might not look with favor on a government that massacres a couple of thousand people and throws several thousand more in jail but the last time the Chinese government slipped up and let a little revolt get out of hand, a hundred million Chinese died.
Posted by HMS Defiant at 7:58 PM
Labels: American royalty, cartography