It appears that the ship was destroyed but not sunk. gCaptain reports that the ship is still afloat and the pictures below are from the Emirates News Agency. It's odd that there doesn't appear to be a mention of the attack in the Al Khaleej Times and only the briefest mention in the Gulf Daily News. 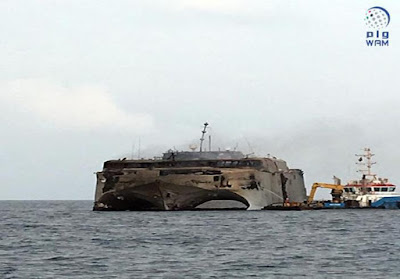 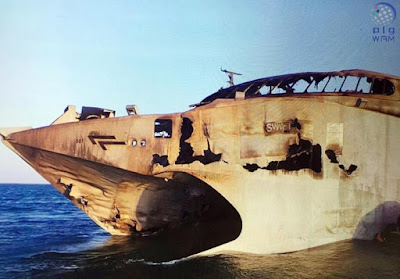 I have no idea what kind of missile does that kind of damage. I inspected the hole left in the hull by an Exocet or Harpoon missile that struck a tanker during the Tanker War in the Persian Gulf and it left a little round hole equal to the diameter of the missile where it passed through the hull before detonating in the cargo. The only sign of exterior damage was the hole.

One remarkable fact is that the hull is still afloat. All the damage was above the waterline since this ship was built to commercial standards and does not have the watertight compartments of warship designs. Hit below the waterline and it will flood the hull and sink.

I'm amazed they managed to put out the fires but then, this ship had a fairly awesome sprinkler system installed to cope with fires.
Posted by HMS Defiant at 9:44 AM