STEPPED INTO THE CLEARING AT THE END OF THE PATH

On weekends I attend to the real news and so I stop and linger at This Aint Hell. I cue up the music and then I read. I would say that it is not an addiction but I've been wrong before. There's a dozen blogs that I don't have on my page that I attend to on the weekend.

In this house, we have only a few rooms that don't have bookshelves. I came here in a vw jetta of a certain blue color (now more blue colors) and I didn't bring more than a handful of books but the house is as full of them as any place I ever called home. I don't understand how people can live without books. They are my fleet. One of my trusty frigates suffered an irreperable injury. It fell all the way to the bottom of the tub. It's sitting in cat litter in the window in the faint hope that it will be ressurected and join the the 2 iPads, 7 kindles and the offshore squadron. I don't think it will make it. It looks pretty dead to me. Not pining for the fjords. Dead. If so it joins the other sony that was a favorite that didn't survive replacing the battery. The late sony was on its last elbows since it needed to be plugged in every day since the battery was fading away.

This is a post about one of the good men who just stepped into the clearing at the end of the path.


While Company 1 was conducting an operation along the axis of a narrow jungle trail, the leading company elements suffered numerous casualties when they suddenly came under heavy fire from a well concealed and numerically superior enemy force. Hearing the engaged marines’ calls for more firepower, Sgt. Pittman quickly exchanged his rifle for a machinegun and several belts of ammunition, left the relative safety of his platoon, and unhesitatingly rushed forward to aid his comrades. Taken under intense enemy small-arms fire at point blank range during his advance, he returned the fire, silencing the enemy position. As Sgt. Pittman continued to forge forward to aid members of the leading platoon, he again came under heavy fire from 2 automatic weapons which he promptly destroyed. Learning that there were additional wounded marines 50 yards further along the trail, he braved a withering hail of enemy mortar and small-arms fire to continue onward. As he reached the position where the leading marines had fallen, he was suddenly confronted with a bold frontal attack by 30 to 40 enemy. Totally disregarding his safety, he calmly established a position in the middle of the trail and raked the advancing enemy with devastating machinegun fire. His weapon rendered ineffective, he picked up an enemy submachinegun and, together with a pistol seized from a fallen comrade, continued his lethal fire until the enemy force had withdrawn. Having exhausted his ammunition except for a grenade which he hurled at the enemy, he then rejoined his platoon. Sgt. Pittman’s daring initiative, bold fighting spirit and selfless devotion to duty inflicted casualties, disrupted the enemy attack and saved the lives of many of his wounded comrades.

President Johnson awarded him the Medal of Honor on May 14, 1968 and Pittman, born on May 26, 1945 in French Camp, San Joaquin County, California, retired from the Marine Corps as a Master Sergeant on October 27, 1988.
I doubt that a single Marine would agree with this but, Master Sergeants of Marines must be spectacularly rare.That, or they all hung out at Henderson Hall and I used to go there often enough when I went home because it had the even more rare NFCU ATM in the basement. I worked with the FAST, a lot and I worked with more gunnies than you could shake a stick at in places like NAVCENT and SURFPAC (combat cargo, yes they were Marines in the office next to mine at SURFPAC), ADAK, Camp Snoopy, Kuwait, everywhere. I never saw a single Marine Master Sergeant. I don't think they're real. They're like witches. You hear about them but you never see them.
I suppose if Mabus has his way with the Marines, they'll just be sergeants.
I think his uniform is instructive. I remember EN2 Anderson quizzing the commodore at captain's call and asking if we were likely to get any medals if we swept some mines in the Persian Gulf. He said, "I've been in the Navy for 6 years and I don't have a single ribbon or medal. I stood on the train platform at Euston to catch a train finding its way to Mildenhall AFB where I needed to be and the young man next me was fresh out of Air Force Bootcamp and already wearing two rows of ribbons. Me, I'd just left a ship where I had spent 12 months in a warzone, swept mythical mines in the Red Sea and had a grand total of two ribbons. (I learned about the third one about 20 years later.)
Hail and farewell Master Sergeant Pittman. 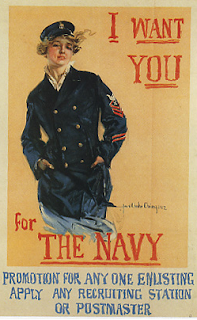 Posted by HMS Defiant at 2:33 PM
Labels: Blithe Spirits, end of the path