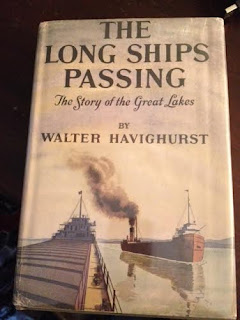 This book is a little older than me (lots older). It talks about fire claiming ships in the Great Lakes like Mud Island talks about the burnings, explosions and loss of paddle wheel steamers on the Mississippi River.

Like the great but little known books on things navigational, this one is authentic. I will quote:


Steamboat commerce to Chicago was inaugurated in the summer of 1832, when with the outbreak of Black Hawk's War the United States Army chartered four vessels to transport troops and supplies from Buffalo to Fort Dearborn. That proved to be a sorry inauguration, though a flood tide of commerce quickly followed it.

Two of those four transports never reached their destination. When the Henry Clay came up Lake Erie to Detroit with 370 soldiers, she brought a terrifying malady with them. Behind her in Buffalo cholera had broken out and was sweeping the town. Before they reached Detroit a number of the troops had been taken violently ill and when one of them died the vessel was ordered away from the public wharf. Shunned as a pest ship with her sick list growing, the Henry Clay proceeded up the St. Clair River to Fort Gratiot, just above the town of Port Huron. There the sick were carried ashore, and the terrified men not yet stricken fled the ship. They scattered through the fields and woods and some lay down in the streets and on the shore and died. A hundred and fifty of them made their way back to Detroit where they were taken in by Andrew Mack, proprietor of of the Mansion House. In a short time two hundred Detroit citizens were stricken with the disease.

Another troop ship, the Sheldon Thompson, sailed past Detroit but put into Mackinac Island for fuel wood. While the steamer fueled several stricken soldiers were taken ashore. They died soon after the vessel had resumed her course. Two fur traders who left Mackinac the next day fell ill before they had traveled twenty miles. They struggled on, not knowing the nature of their malady, until their bodies were fired with fever and their shaking hands turned purple before their eyes. They died with the wilderness around them. But the disease did not spread in that latitude with its sparse settlement.

Meanwhile the Sheldon Thompson arrived outside the Chicago River (then undredged and fordable at its mouth?. She anchored there with the doom spreading through her cabins. Sixteen of her troops were already dead and buried in Lake Michigan. During the next five days eighty-eight more bodies slipped into the water. When word reached a fleet of schooners anchored along the shore they made sail frantically and scattered like gulls over the lake. Within a few weeks cholera broke out in St Louis and New Orleans.

So the great epidemic of the 1830's passed through America's waterways. It had begun in central India, and was carried, by way of Tehran, to Moscow. In the spring of 1831 it took thousands of lives in Warsaw and that autumn it ravaged Hamburg. A trading vessel carried it to England in October. In June of 1832 a British ship arrived in the St. Lawrence with a list of 145 immigrants, of whom forty-two had died of cholera during the passage. In the next four months it spread from Buffalo up the the Great Lakes and down the Mississippi. Disease traveled the trade routes of the New World.

During the summer the dread of plague lingered over the little town of Chicago. The Indians heard of the scourge and sought the immunity that came from the powerful 'English milk' that gurgled out of oaken barrels. A Potawatomi chief appeared at the Agency house, observing in his own tongue that he was a good man, a very good man and a loyal friend of the the Long Knives. Could he not then have a dram of whisky? The agent replied that he never gave whisky to good men; good men never asked for whisky or liked to drink it. Before he had finished that brief homily the Indian spoke in English.
"Me dam rascal."

I like and prefer old history. I stopped reading history books written after the passing of Charles Oman. I can't stand revisionists. Go to primary sources, secondary sources and eschew made up fictional history.
Posted by HMS Defiant at 11:59 AM
Labels: Shipping news