Sabbatical started when I got underway on Saturday and proceeded independently to pick up girl in the name of love. I'll be on sabbatical until July 26th. I will post when I have time and am too outraged, (next post in about 12 minutes).

Today was a perfect day to go kayaking on the Potomac because it was raining just a little bit but instead, we went shopping until we bought her her first actual laptop. She had a Leapster, a DS2 and an iPod but for some odd reason we are forced to conclude that this computer is her first. 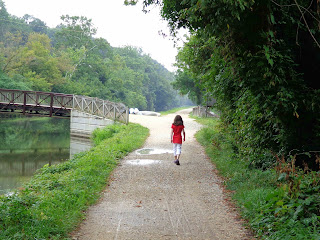 I'm OK with that. Tonight we watched Jumper. I knew what it was but she didn't. I suspect that she still thinks that somewhere, there is an Easter Bunny and a pony. It's long after midnight but I have no doubt that upstairs in this house she is applying 6 different programming languages to write apps that will make millions. I also gave her the first iteration of the Captain K speech. We'll see how it goes. Right now it hangs in the balance. One needs to learn early to conceal one's distaste for the ruling class or lose out on all opportunity in society. It's a lesson her mother never learned. In truth, it wasn't a lesson that woman ever heard of.
Posted by HMS Defiant at 3:33 AM