I know a frightening number of people who will vote for her even though they don't trust her at all. 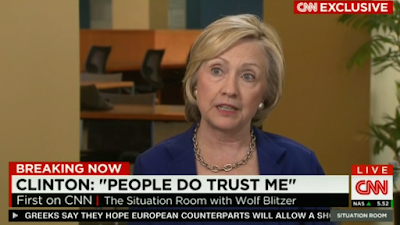 I don't understand how people can be that stupid. On the other hand, the left only has the lying Clinton, Bernie the communist and perhaps noted author J. Webb as candidates for president. I've met Webb and he isn't a raving nutcase. He is sure to come in 4th place in the democratic primary. The actual Green party, the PETA party and Al Gore will all get more votes than poor Webb.

Kind of makes you wonder now though doesn't it? Why isn't that hack Kerry throwing his head in the ring again? He was a senator too and has all that rich experience as Secretary of State gained by thoroughly disemboweling the remains of the State Department and selling Obama's enemies down the nuclear river. Perhaps he feels over qualified.

On the gripping hand, somebody who knows him should poke him and see if he's still alive or if Clinton somehow had him turned into a zombie.
Posted by HMS Defiant at 4:30 AM
Labels: American royalty, Palace News, scum