I have to say that I've lost my faith in the media. Their senility, dementia and rabid partisanship are crowding out all reference to reality. David Ignatius sucks.


Let's say it plainly: This is how nations lose their power and influence, when they are unable to agree even on basic matters such as diplomatic representation. The decision-making system breaks down, and the public is too bored or disunited to take action. Sadly, that's a snapshot of America in 2014.

I think the Republicans willingness to work with democrats snapped when Obama and Hillary Clinton left our ambassador to Libya to be captured, raped and killed by their peaceful muslim friends from the Brotherhood, or al Quida or ISIS. And I'm not sure anymore about how the Senate works after the Democrat Senate Majority Leader used a nuke to destroy the Senate Rules of generations that ripped away any need for Republican participation in the Senate Nomination and Approval process in a contemptible way so that Harry Reid and Obama could simply shove any nominees down the country's throat without a single vote from the Republican minority.


6)     If any Senator objects to unanimous consent, then a cloture motion must be filed in order to end debate and move to a vote.  Cloture motions for judicial and executive nominations require 51 votes to pass.  If 51 Senators support cloture, the full Senate will vote on the nomination, with a majority required for confirmation.  If fewer than 51 Senators support cloture, debate continues and a confirmation vote cannot occur.  This is known as a filibuster. Prior to the November 2013 Senate rules change, all cloture motions required 60 votes to pass. Now, only cloture motions for legislation and nominees to the Supreme Court require 60 votes.

What do you say about a main stream media Washington inside scumbag who doesn't know what the President and Harry Reid did when they rammed through the nuclear option that destroyed any sense of comity between the democrats and the republicans? This Congressional Research Report explains the process that exists now for all nominees:


The question before the Senate when a nomination is called up is “will the Senate advise and consent to this nomination?” Only a majority of Senators present and voting, a quorum being present, is required to approve a nomination. Because nominations are vulnerable to filibusters, however, in the past a higher level of support has been necessary. Cloture may be invoked to place limits on further consideration of a nomination. In November 2013, the Senate (majority)* reinterpreted Rule XXII in order to allow a majority of Senators voting to invoke cloture on nominations other than to the Supreme Court. In the absence of unanimous consent, bringing a nomination to a vote could still require a multi-day cloture process, but with the exception of Supreme Court Justices it will no longer require the support of three-fifths of the Senate (typically 60 Senators).

The problem that rethuglicans have is that there are so many media partisans who conveniently ignore the facts or simply make up their own. Many of them are members of the ultra-left wing journolist scandal.

The facts are clear to anyone except an extreme left winger like Ignatius. Democrats could have confirmed 100%  of all of Obama's nominees by now if they wanted to. They gave the simple majority of the quorum the right to do so and there have always been more democrat senators than republican since the last Congress of the United States. 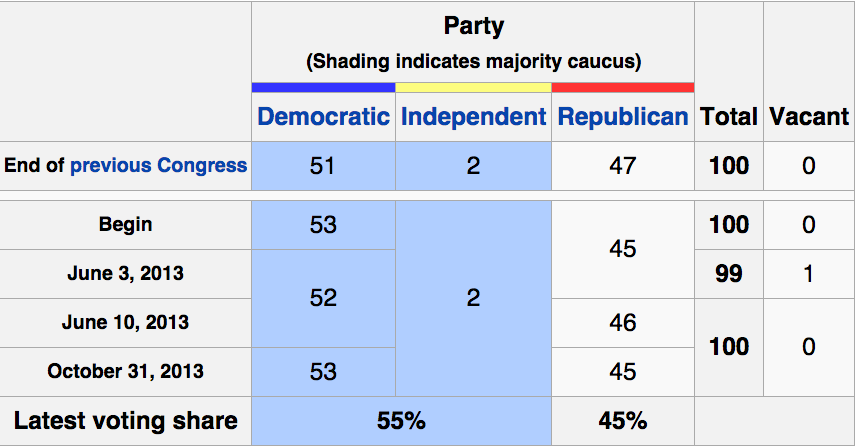 It speaks volumes that they cannot get even a single rethuglican to go along with voting for many of the nominees held up and most especially for the State Department and Justice who have stonewalled every minute of the day since 9/11/2012.

*I added the word 'majority'
Posted by HMS Defiant at 10:00 AM
Labels: Congress, contempt, News