This was interesting too. Somebody activated the fire suppression system in the hanger of the Minnesota National Guard and foamed all 10 aircraft in the hanger. I hope they were as foam tight as they are watertight but I wouldn't bet on since one of the things that often happens is people pull access panels off to get at the guts of the machine. 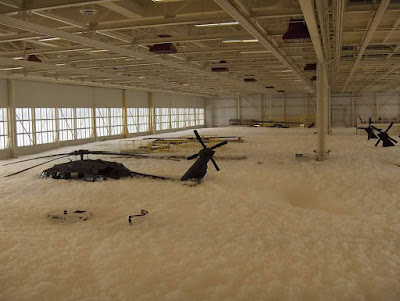 We had some jerk deliberately activate the fire suppression system in the helicopter hanger on my first ship. We were enroute Karachi to Bahrain after a month in Karachi and the CO had agreed with the embassy to allow American citizens to use our post office to mail things home to America. I had 84 bags of mail stacked in the hanger waiting for transshipment to  the Fleet Post Office in Bahrain. They were all thoroughly foamed. That night the CO came on the 1MC just after lights out and said very clearly that everyone was looking for the guy who pulled the activator and if he was found he was simply going to be lost overboard. It sounded very sincere to me. The suppression systems cannot be locked since they're emergency equipment so anybody could do it and the activators were located in out of the way places throughout the ship.
Posted by HMS Defiant at 5:15 PM