I got one of those letters once. It contained the test results of a test we were all required to take before deploying overseas back in the 90s. I'm sure they don't require them anymore since that's the nature of a defanged society. Back then this was shattering. Without any care at all for what it meant, it was the kiss of death to one's navy career and also, you know, the kiss of death. 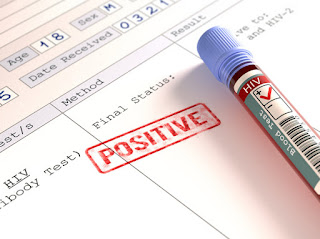 There was no treatment and the Navy certainly didn't have anything like a treatment. What the Navy did was invite HIV people to the world. It turned out that they were complicit in giving HIV to many servicemen via their hospitals and poor sanitary practices. That was what shed the stigma from that particular social disease. It was no longer just fags getting sick, it was warrant officers and their children who got contaminated blood transfusions in Navy hospitals.

As a CO I got to give the bad news to a man that he had tested positive. It took about a month for his worlds to end. Let go by the Navy, let go by his wife, let go by the nuclear power station where he worked as an electrician and let go by his church which dropped him overnight. There was nothing at all I could do about all that despair. He held on for dear life but when his church dropped him it was over. A month from opening that letter until the end. 30 days.
Posted by HMS Defiant at 1:46 AM