THE ACTUAL RETURN OF OLD POLITICS

He nailed it. The names he mentions are the only ones the media notices and they love them. I can only see a handful in the south or midwest voting for democrats for another generation. The democrat and 'progressives' love for antifa and the rest of the hate crime in this country pretty much poisoned the well.

I'd say too bad but then, I don't like them, I don't like their policy, I don't like their economic suicide plans and I just don't much care for them personally. It says just about everything about a culture when the most rabid losers all swarm into cities built by other people, take them over, run them into the ground, steal the pensions of the city workers and then leave town claiming victory and run for President.

What I like about this president as with Reagan is the glib and intelligent way they can speak candidly on a dime. I think obama went 3 or 4 years without holding a single press conference because he is about as smart as a brick. Trump wades into them, levies broadsides, strolls out of them and we have such a polluted media culture that all they can do is carp about what he didn't say. 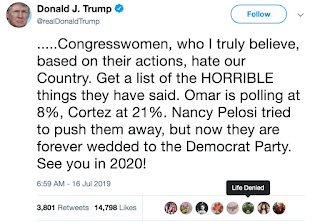