NOWADAYS THEY RUN AWAY

This is from a fairly famous poem by a lesser known author. It dates back to when the audience had some familiarity with history and people actually fought for their civilization and didn't run away and pretend to be refugees. 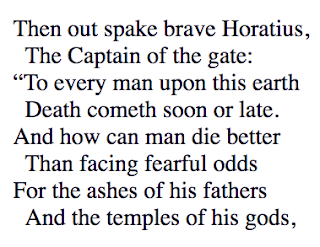 To be honest, the Captain of the gate would have a place anywhere of honor. Some of you see them today at the VFW.

Watching the debacle as the royal navy intercepts a tanker near Gibralter and watching the Persian Empire retaliate by taking two Britishish tankers knowing that England isn't the power it once was but still appears to think it is: priceless. Short of nuclear weapons, everything that Britain could throw at Persia would perish in a short while. Most people think of Persia as 3rd world state. It isn't.

Give the British ruling class extra marbles for a forlorn hope but take away the marbles for their failure to realize that the Royal Navy is a shadow of what it was in the Falklands War or in the centuries before. There is no there, there. The mullahs have masked and largely negated the power of that people but it is still there and let us just say, it is steeped in conquest and evil.

More anon. It's a subject worth exploring.
Posted by HMS Defiant at 5:40 AM