THE TRIUMPH OF STUPID IN COLORADO

I was out and about this morning so I listened to how the Denver Metro Area shut down most of its schools because a scary Floridian, (no, not that one), was known to be on the loose in Colorado and was not only armed but infatuated with Columbine. I'll leave it till later to determine if that was so much BS as usual or has any hint of truth or reality.

Surely this was a massive woman hunt, no? 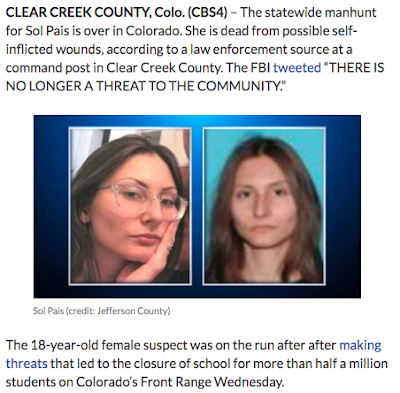 Just how did they ascertain that there was no longer a threat to the community? Does that last indefinitely, for all time, or until the next glory-seeking loser blows the doors off the school and tears the hearts out of parents of school children the state, city and country refuses to protect?

But let's just look at the FACTS.

Denver metro schools were ordered closed because they had a so-called lunatic 18 year old weirdo from Florida in town who had supposedly bought a shotgun and ammo upon arrival. My God, was she allowed to travel without a parent? How on earth could she buy a gun at such a tender age? All of these questions must be pouring through the place in liberal heads where other people keep their brains and intelligence.

Ask yourself, what possible justification does the school district in greater Denver use to justify keeping the schools open the other 173.5 days of the year? Surely there are about 100,000 known gun armed types roaming the state at large for the entirety of the year and they somehow don't pose a danger?

Don't they have any consideration for the poor innocent children and teachers forced to attend the schools on the other 173.5 days of the year?

Well, we have barely touched on the stupidity in Colorado. They are hellbent to save money on education and half of their schools now only teach 4 days/week. Think how much more money they could save if they cut back to just Sunday school one day/week and left it up to the churches to pay for while also mandating BLTG studies and hourly classes against 'privilege,' all paid for by the churches of course. And of course the same crowds of fools, idiots and morons that eschew vaccination could also insist on blowing off school altogether if it meant any kind of ooooooooh, religious instruction.

Honestly, Heinlein was prescient. These are the crazy times.
Posted by HMS Defiant at 3:10 PM