Mostly I could always tell when I was sailing by the lee and knew when a jibe was imminent. I suspect the critters of the 2% and 5% are going to get an awakening they won't much like when the backlash sweeps them off the stage and sends their allies into the dump alongside them. Something more than 50% of the country is a little tired of the precious few, the snowflakes and the people who give life to asserting their dominance over Hollywood and media and all the Democratic Party politicians that embrace all the perversions of modern life and ignore or hector to death those that do pay attention to the real and honest news of the day.

Anyone would think, what? Venezuela didn't convince you, like Cuba should have and couldn't see that socialism is tyranny on steroids?

Here at MetroParkCentralis we take the WSJ and Sunday NYT. We know the greater reality. It aint much. We tend to sneer at it's tattered remains. But here, we know the grand sweep of history and nothing at all done by government or religion today was not tried in the past. Again and again and again and again, save one thing that germinated in England and was and spread to America by religious zealots and others where it took strong root in the north and died aborning in Central and South America where the traditions and heritage of the founders doomed it to death and ignominy.

Sadly, the thing that makes our heritage here unique is one that dooms our experiment in just about every other tradition. Oh sure, in our founder's tradition it worked but there are different traditions and those don't really go for any of the beliefs our founders held as facts.

Those interested might find a reference to the Wizard's War mentioned oh so briefly in the works of Frezza. Color me gobsmacked!!!! Amazon want over $70.00 for the paperback. I've got a couple here, a couple more in the library I left behind with Chaplain Harvey and more left behind in Seattle and Bahrain. Damn! 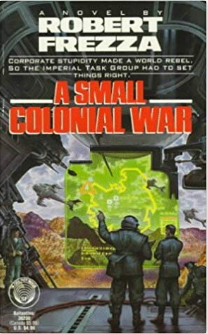