This is an interesting question. What would Mueller's report look like if this had been turned up in his investigation into President Trump and all his minions? 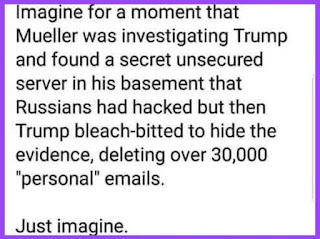 And what if every single computer, cell phone and Blackberry used by all of the principals was wiped, bleach-bitted and smashed to bits with a hammer by a minion who worked directly for President Trump? And what if the RNC's computers and the Republican Congressional staff's computers were maintained by Pakistani criminals who gained access because they were hired by the Congresswoman who lead the DNC and gave them access to every bit of the Democratic Party's Congressional computer networks and then fled the country one  jump in front of the law and not one single computer or file was turned over to the FBI during the course of the investigation?

Things would be a little different just by a tiny shift in perspective and where you stand.
Posted by HMS Defiant at 7:30 AM